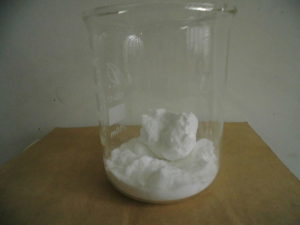 Mercury (II) chloride exists not as a salt composed of discrete ions. But it composes of linear triatomic molecules. Because of this, it’s having a tendency to sublime. Within the crystal, each mercury atom bonds to two chloride ligands with Hg—Cl distance of two .38 Å. Six more chlorides are more distant at 3.38 Å.Its solubility increases from 6% at 20 °C (68 °F) to 36% in 100 °C (212 °F). Within the presence of chloride ions, it dissolves to offer the tetrahedral coordination complex [HgCl4]2−.

Another route involves heating a mix of mercury(II) sulfate and common salt. HgCl2 is made as vapours, and sublimes, condensing inside the reaction vessel. This route is extremely dangerous because the HgCl2 vapours are extremely toxic. We obtain Mercury (II) chloride by the action of chlorine on mercury or on mercury(I) chloride. The addition of acid to a hot, concentrated solution of mercury(I) compounds like the nitrate produce mercury (II) chloride.

Q] How mercury (II) chloride reacts with aqueous ammonia and writes its reaction.

Solution- Aqueous ammonia produces white amido salts . And its composition depends on the mercury(II) salt present within the solution:

These salts aren’t soluble in excess aqueous ammonia, but do dissolve in acids: