Mercury (II) Nitrate is a white crystalline solid. Prolonged exposure to fireside or heat may end in an explosion. It produces toxic oxides of nitrogen when heated to decomposition. The molar mass of mercury(II) nitrate is 324.60 g/mol. The density of it is 4.3 g/cm3. And therefore the freezing point is 79 °C (174 °F; 352 K).

It is sold by chemical suppliers, however, because of its hazards, It’s extremely difficult to urge hold of. The sale of mercury(II) nitrate, like most mercury compounds, is restricted in many countries because of its great toxicity. Its sale within the EU is banned without a correct hazardous substance permit. It decomposes when heated, releasing dioxide and oxygen. And it may be a white solid, soluble in water and nitric acid. 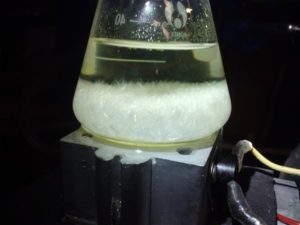 To dry it, the solution is gently heated until the compound solidifies. it’s suggested to not heat it too high because it will decompose. If diluted nitric acid is used instead, mercury(I) nitrate will be formed.

It is extremely toxic and it can absorb through the skin. Wear proper protection when handling the compound. There should be contamination protective clothing. Segregation should be in such a way in order that there’s no direct personal contact by personnel who handle, dispose, or clean the clothing. Quality assurance to determine the completeness of the cleaning procedures should be implemented. And it is to be done before the protective clothing is returned for reuse by the workers.

It should be stored in closed bottles, to a correct hazard label, indicating it is a dangerous compound. Plastic (PE or PP) bottles are ideal, as they are going to not break if we drop them on a tough surface, just like the floor. Mercury(II) nitrate should undergo conversion to an insoluble form, like mercury sulfide, then taken to hazardous waste disposal centres.

We use Mercury (II) nitrate in mercuration reactions. Moreover, it is nitrification and analytical reagents utilized in laboratories. It also utilized in the preparation of fulminate of mercury.

Q] Discuss dry and wet methods for the reduction of mercury (II) and write a reaction.

Solution- There are two pathways for the reduction of mercury (II) using a dry or a wet method.

Dry method; The foremost straightforward way to obtain metallic mercury from nitrate is to heat Hg(NO3)Hg(NOX3) during a distillation apparatus (b.p. of mercury is 357 °C). Therefore, above 400 degrees, it readily decomposes: