The molar mass of a compound is simply the mass of the number of molecules of the compound. Between 1971 and 2019, SI defined the “amount of substance” as a separate dimension of measurement, and therefore the mole was defined because of the amount of substance that has as many constituent particles as the number of atoms. Since 2019, a mole of any substance is the amount of that substance containing an exactly defined number of particles, N = 6.02214076×1023. In this chapter, we will learn more about molar mass formula, calculation of molar mass and various examples.

The molar mass of a compound is the mass of a given substance divided by the quantity of substance therein sample. It’s bulk, not molecular, the property of a substance. The molar mass is a mean of the many instances of the compound, which frequently vary in mass because of the presence of isotopes. most typically, computation of molar mass is from the quality atomic weights and is thus a terrestrial average and a function of the relative abundance of the isotopes of the constituent atoms on earth.

Molar Mass= Mass of given substance/amount of substance

The molar mass is an intensive property of the substance, that doesn’t depend upon the dimensions of the sample. within the Systeme International d’Unites of Units (SI), the bottom unit of molar mass is kg/mol. However, for historical reasons, molar masses are nearly always expressed in g/mol. 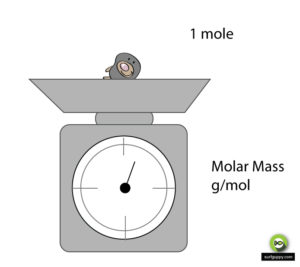