The inter-conversion that occurs between water, carbon dioxide, and dissociated carbonic acid ions, is catalyzed by a group of enzymes that form by carbonic anhydrase, or carbonate dehydratase. The active site for most carbonic anhydrase is supposed to be a zinc ion, and it is as a result classified as metalloenzymes.

Other than helping in the transport of carbon dioxide, the enzyme also maintains acid-base balance, aids in the regulation of pH, and helps maintain fluid balance.

However, the exact role of the enzyme depends primarily on its location. For instance, in the stomach lining, carbonic anhydrase produces acid. Whereas in the kidney, due to the control of the bicarbonate ions the content of water in the cell gets uneasy. The bicarbonate ions also influence water content in the eyes; however, if there is a build-up of fluid it can cause glaucoma. 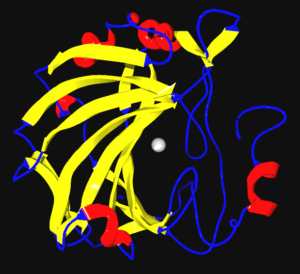 These are zinc-containing metalloenzymes that act as catalysts in the dehydration of bicarbonates, as well as the hydration of carbon dioxide.

The reversible reaction for this process is as follows:

In spite of being one of the fast-reacting enzymes, the rate of carbonic anhydrase is inhibited by the rate of diffusion of the substrates.

There are five recognized distinct carbonic anhydrase families. However, they do not have any similarity in their amino acid sequence and we believe it to be an example of convergent evolution. Carbonic anhydrase is classified as follows: we can locate the zinc ion in the enzyme in a cavity shaped like a cone, with three histidine side chains, and in the fourth position, there is a solvent molecule. However, a fourth histidine is located near the water ligand which helps in the formation of the Zn- OH centre, where carbon dioxide attaches itself resulting in the formation of zinc bicarbonate.

Q.Where is carbonic anhydrase not present?

A. The correct option is ‘c’. We can found carbonic anhydrase in the gastric parietal cells, red blood cells, as well as renal tubular cells.