You have too often come across this question: Why are some metals more metallic? However, you possibly have always avoided this question. Haven’t you? Well, no more! We will give you all the answers in this chapter. We will cover the periodic trends of the metallic and non-metallic character of elements in this chapter.

Metallic Character of a Metal

By following the trend summary in the figure below, you can see that the most reactive metals would reside in the lower left portion of the periodic table. The most reactive metal is caesium, which is not found in nature as a free element. It reacts explosively with water and ignites spontaneously in air.

Francium is below caesium in the alkali metal group. However, it is so rare that most of its properties have never been observed. 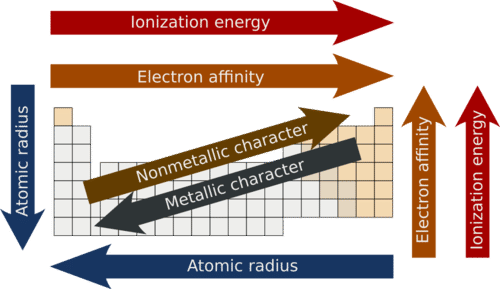 Learn more about Electronegativity and how it affects Metal and Non-Metallic Character.

Non-metallic Character of a Metal

Nonmetals tend to gain electrons in chemical reactions and have a high attraction for electrons within a compound. The most reactive nonmetals reside in the upper right portion of the periodic table. The noble gases are a special group because of their lack of reactivity. However, the element fluorine is the most reactive nonmetal. It is not found in nature as a free element.

Fluorine gas reacts explosively with many other elements and compounds and is considered to be one of the most dangerous known substances.

Note that there is no clear division between metallic and non-metallic character.  As we move across the periodic table, there is an increasing tendency to accept electrons (non-metallic) and a decrease in the possibility that an atom would give up one or more electrons(metallic).

Trends in the Metallic Behaviour of Elements

Learn more about the Historical Development of Periodic Table here.

Q: Note down the non-metallic character trends in the periodic table.