An electrode is a substance that is in use for the conduction of electricity. The electric current comes or leaves the non-metallic medium like an electrolytic cell. In simple language, an electrode is a conductor that helps in establishing electrical contact with a non-metallic part of the circuit. Electrodes consist of two main things that are cathode and anode which basically describe the direction of flow of current. The terms anode and cathode are not given by the voltage polarity of electrodes but the direction of current through the electrode. 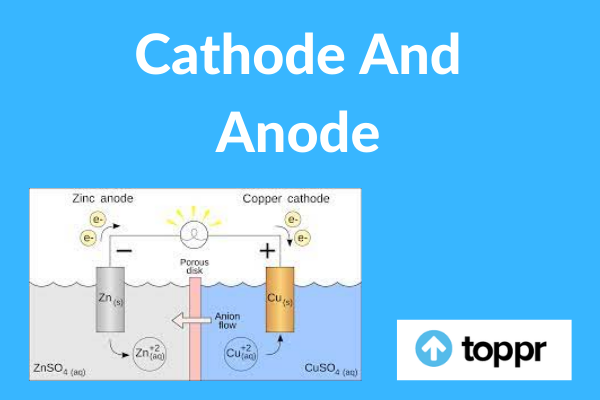 What is a Cathode?

It is an electrode from which a current leaves a polarized electrical device. This can be recalled by using the mnemonic Cathode Current Departs. A conventional current shows the direction in which positive charges move. Electrons have a negative electrical charge. Therefore, the movement of electrons is opposite to that of the current flow.

The cathodic current is the flow of electrons from the cathode interface to a species in solution.

In an electrolytic cell, the cathode is where the negative polarity is applied. Some results of reduction at the cathode are pure metal or hydrogen gas from metal ions. While studying the relative reducing power of two redox agents, the couple for making the more reducing species is more cathodic with respect to the more easily reduced reagent.

When metal ions are reduced, they form a pure metal surface on the cathode. Items to be plated with pure metal are attached and become part of the cathode in the solution.

An anode is an electrode by which the conventional current enters into a polarized electrical device. In contrasts with a cathode, an electrode by which conventional current leaves an electrical device. A common mnemonic is anode current into the device. The direction of current in a circuit is opposite to the direction of electron flow. Therefore, the negatively charged electrons flow out the anode of a galvanic cell, into an external circuit connected to the cell. In both a galvanic cell and an electrolytic cell, the anode is the electrode where oxidation reaction occurs.

In an electrolytic cell, the anode is the wire with a positive charge. Anions tend to move towards the anode where they can undergo oxidation. Historically, the anode was known as the zincode.

FAQs on Cathode and Anode

Question 1: What is the charge on anode and cathode?

Question 2: What is the charge of an anode and cathode?

Answer: The anode is negative in a galvanic cell and the cathode is positive. It is because of the fact that anode is the origin of electrons and where the electrons flow is the cathode.