Climate zones refer to areas that are having distinct climates, occurring particularly in the east-west direction around the Earth. Furthermore, there have always been variations in different climate zones that are present all over the Earth. This depends on the precipitation, weather and the general temperature of that particular area.

Climate, as we all know, is the condition which is usually present relating to the humidity, temperature, atmospheric pressure, rainfall, wind and another meteorological element in a particular area on Earth’s surface for a sufficiently long time. In short, we can say that climate is the weather patterns in an area over a long term period. 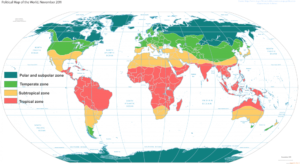 In those regions, the climate is usually warm. Furthermore, due to such high temperatures, more water evaporation takes place and the air becomes moist due to this in such regions.

Examples of Countries that fall under the tropical zone are countries of South America including Brazil, Peru, Bolivia, Ecuador along with the countries in Southeast Asia including Thailand, Cambodia, Vietnam, and Malaysia.

Temperate regions are such regions that are often referred to as middle latitude or mesothermal climates. Such areas are characterized by having little rainfall and in such areas, the summers are quite warm.

In the temperate regions, when the coldest months arrive, the temperature in those regions ranges between 26.6° to 64.4° Fahrenheit. Regions that fall under the temperate zones include marine regions, subtropical regions, and Mediterranean regions.

Examples of Countries that fall in the temperate zone include India, Japan, the United States of America, Canada, etc.

Regions that fall under the polar zone have little or no summer. The warmest temperature in those regions on an average is around 50° Fahrenheit.

These regions become distinctive compared to other regions due to the presence of large blocks of permanent ice and tundra. Such regions also have months of very little daylight.

Examples of polar zones include the Arctic and the Antarctic along with Alaska, Sweden, and Finland.

Dry zones include regions experiencing very little rainfall. Such regions also tend to have large ranges in daily temperatures. Talking about the deserts of such regions, the temperatures over there can reach over 120° Fahrenheit during the days and may fall up to 100° Fahrenheit or less during the nights.

Cold zones are also referred to as the continental or microthermal climates characterized by having high seasonal variations in temperatures and moderate rainfall. Such regions are found in the central regions of landmasses.

Question: What is the temperature range prevalent in the temperate zones in the coldest months?

Share with friends
Previous
What are Different Types of Weather ?
Next
How to Rationalize the Denominator?