The Torrid Zone represents the largest geographical zone on the Earth. It covers an estimated 40% of the planet’s area. Almost 40% of the Earth’s total population resides in the tropics. This will be increased to reach 50% of the global population by 2040. The Torrid Zone is the richest of the five geographical zones, with its habitats supporting more animal and plant species than any other zone. 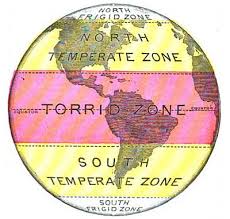 What is Torrid Zone?

The torrid zone generally refers to the area of the earth near the Equator. The torrid zone is generally warm. It has a wet and dry season but does not have four seasons familiar to residents of the temperate zones further from the equator. This warmness of the torrid zone influences its weather, ecosystems and geographic features.

The term torrid zone was first used by the Greek scientist Aristotle to define the area of the earth closest to the equator. Aristotle assumed this area was too hot for human habitation since the sun’s rays targeted this region from directly above.

The Greek philosopher Parmenides also divided these zones into five separate regions with the torrid zone. North and south temperate zone were added as were a north and south frigid zone to create a five-zone climate system. Then the standard Koppen climate mapping system was devised in the 19th and 20th centuries.

It is quite typical to think about the abundant rainfall, lush plants and trees, and varied animal life. This zone contains all of these features and one important event that doesn’t occur in the other climate zones: The sun is directly overhead at least once during the year in the torrid zone.

However, the torrid zone has a variety of topographic features affecting the climate, many deserts and mountains fall within the latitudes defining the torrid zone. Rainforests, as well as snow-capped mountains, are possible within this zone.

For example, the Andes Mountains in Chile and Argentina fall within the tropical zone but contain snow and alpine tundra. On the other hand, Australia and portions of Africa fall within the torrid zone. Both of these continents have a very large area of desert with very dry year-round conditions.

Torrid zones have a multitude of vibrant plant and animal life. Although, Biomes exist throughout the zones, but also some distinctive ones exist in this zone. The tropical rainforest contains a dense tree canopy that blocks the sunlight from the forest floor.

Therefore, the smaller trees, shrubs, and ferns on the rainforest floor have adapted such lacking of sunlight. Also, areas of the Sahara Desert contain animals and plants have adapted to the long days of sunlight and little rain.

The tropical zone contains areas that are the hottest places on earth. Local people within the torrid zone receive plenty of rainfall to promote lush vegetation growth. The temperature stays relatively uniform from day tonight. Cloud cover helps keep the temperature uniform throughout the seasons.

This cloud cover also promotes almost daily rainfall during the wet season. When warm moist air rises and is combined with ground heating by the sun, this results in thunderstorms. In the tropics, winds tend to blow from east to west. Due to this deserts to be located on the western side of major continental masses.

The torrid zone covers areas of abundant rainfall and heat from the earth’s surface. This intertropical convergence zone brings daily thunderstorms to the torrid zone and controls the weather of this zone.

Which countries are in the torrid zone?

There are many countries such as Indonesia, Malaysia, Thailand, Vietnam, Taiwan, Burma, Sri Lanka, India, Bangladesh, Ghana, Madagascar, Chile, Brazil, Argentina, and Mexico are some of them.

Is India in the torrid zone completely?