So nearly all rocks on the planet have some metal or mineral content. However, the concentration of this metal is too less for it to be valuable. Ores usually have a very high content of the desired mineral, but it still must be separated from other mixed impurities, this method is known as the concentration of ores. Let us discuss this topic.

An ore of a metal is an impure source, this means other than the metal it consists of many other impurities such as sand, grit, clay, rocks etc. These impurities are collectively known as gangue. Gangue is generally commercial valueless and we must separate it from the ore. This entire process is the concentration of ores or even dressing or benefaction.

Now there are numerous ways to carry out the concentration of ores. The correct method is chosen based on the physical and chemical properties of the metal. Let us take a look at some of the most common methods.

Learn the process of Refining the Metal.

This method is based on the differences in weight between the gangue and the metal. Generally, the metal particles of the ore are heavier than the impurities. So we use the principle of gravity separation to separate the two.

Here crushed ore is mixed with an upward stream of running water. The lighter particles of the gangue wash away in the running water. The heavier metal particles settle down and can be separated easily. We use this method for ores that contain lead and tin since these are relatively heavier.

Iron ores and manganese ores are the main ones for which we use magnetic separation. Magnetite and Chromitite ores (both iron ores) use this method on a large scale to remove their impurities.

Learn the process of extracting Crude Metal from Concentrated Ore. 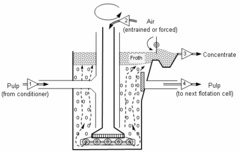 Another method of concentration of ores is the Froth Flotation Method. This is the process for concentration of primarily sulphide ores. It has the advantage over gravity separation because it can collect even the extremely fine particles of minerals.

The process uses the difference in the wetting characteristics of minerals and gangue. Minerals are generally wetted by oil and gangue is wetted by water. So they prepare a mixture of the crushed ore with water, oil and other substances.

And rotating paddles will then agitate such mixture and introduce air. The air will cause bubbles to form, which attaches itself to the solid particles of minerals. And then a froth will form and it will rise to the top. This froth will contain the mineral particles which we can now separate. There are three main types of additives in this process, namely

Leaching is a chemical process of concentration of ore. Here the ore dissolves in a chemical solution. The minerals will react and dissolve leaving behind the impurities only which filter out.  And then the metal will be obtained from the chemical solution. Let us now take a look at an example of how we obtain Aluminium by leaching.

The leaching of aluminium from its core bauxite on an industrial scale is known as the Bayer process. This process will give us the end product of Alumina (aluminium oxide) from bauxite. The other impurities of silica, titanium oxide and varies other oxides will separate.

The first step is to heat the bauxite ore to temperatures of 200°c along with a sodium hydroxide solution. This will convert the aluminium oxide to a solution of sodium aluminate. The silica will dissolve itself in the process. The chemical equation is

From the above solution, we remove solid impurities by filtration. Then we bubble carbon dioxide through the aqueous solution of sodium aluminate to neutralize it. And aluminium hydroxide precipitates as a result.

This hydrated alumina is then heated to 1470 K. This gives us a pure form of aluminium hydroxide without the impurities.

Q: Which one of the following ores do we concentrate by chemical leaching method?

Sol: Gold and silver ores are concentrated by leaching. In this method, we treat the ore with a suitable reagent in which ore is soluble but impurities do not. Thus, impurities are removed by filtration.
Among galena, copper pyrites, cinnabar and Argentine, Argentite being silver ore is concentrated by chemical leaching method.

Thanks for sharing how zinc is suitable for Galvanization. I’ve heard Galvanization is useful for tools and utensils. I’d like to get some kitchenware that is made of galvanized metal.