Table of content
1 Suggested Videos
2 Introduction to Matter
2.1 Browse more Topics under Matter In Our Surroundings
3 Nature of Matter
4 Question For You 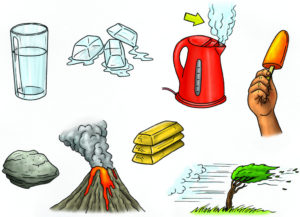 Matter is something that occupies space and has its own mass. It is something that can be felt by us. Some examples of matter are air, water, food, table, pen,  gold, sand, fruits, plants, trees, bottle, plastic, stones, oil, fan, chair etc. All these things occupy space and have their own masses. Both, living things and non-living things are matter. The entire universe is composed of matter.

However, few things like heat, sound, light, and electricity cannot come under the term matter, because they do not have mass, but they can be useful to do work. Heat can be used to iron clothes, cook food, water, etc. Electricity has multiple uses like making the fans revolve, useful in operating machines, etc. Our eardrums vibrate due to sound. Plant use light to create their food. Light is also useful during the night time to work or study.  All these things are forms of energy. Energy means the ability to do work.

Browse more Topics under Matter In Our Surroundings

Tiny atoms form matter. The number of these tiny particles may be larger. Naked eyes can’t see these extremely tiny particles. Atoms can only be observed with the help of high- powered microscope. The following is the nature of matter :

Q. Which of the following is a matter?