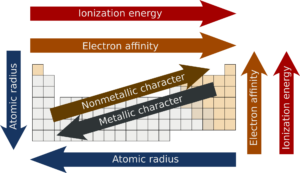 Atomic size is the distance between the centre of the nuclei and its outermost orbit. In simple terms, it is the radius of an atom. It is noticed that the atomic size of elements decrease as we move from left to right in a period. This is because the electrons increase hence increasing the nuclear charge.

When the nuclear charge is stronger, the nucleus pulls the electrons closer to itself so reducing the atomic radii. As opposed to this when one moves from the top to bottom of a group, the atomic size of elements increases. This is because the number of shells of the atom increase, increasing their radii.

Example: The atomic size of all elements in period 2 in picometer (pm)

Electronegativity is the ability of an atom of any element to attract a shared pair of electrons in a chemical bond, towards itself. It is a measure of atom’s tendency to form a molecule by attracting electrons to itself. The most electronegative element is Florine and the least is Caesium.

So by this, you can probably deduce that as you move in a row (period) from left to right the electronegativity increases. And from top to bottom in a column (group) it will decrease. This is because when the number of shells increases as we go down a group, so the pull of the nucleus to attract electrons decreases.

Then there are the metalloids also known as the semi-conductors. These borders the zigzag line on the periodic table. These have some properties of metals and some of the non-metals. Some examples are Boron, Arsenic, Tellurium etc.

And now we have seen the periodic table trends. However, it is important to remember that these trends do have some exceptions.

Q: Which among the following elements has largest atomic size?

Sol: The correct answer is option “d”. On moving down the group the atomic size increases. Therefore Indium has the largest atomic size.