In view of the coronavirus pandemic, we are making LIVE CLASSES and VIDEO CLASSES completely FREE to prevent interruption in studies
Chemistry > Surface Chemistry > Emulsions

Did you know that the word “emulsion” is derived from the Latin word  “mulgeo” which means “to milk”? Milk is an emulsion of fat and water, along with several other components. But what exactly are these Emulsions and what is their significance in our daily lives as well as their applicability in industries?

What is an Emulsion?

Emulsions are biphasic liquid systems consisting of two immiscible liquid phases. These phases are present in such as way that one phase is dispersed in the other continuous phase. Emulsions are part of a more general class of two-phase systems of matter called colloids.

Although the terms colloid and emulsion are sometimes used interchangeably, the term emulsion is used only when both the phases are in a liquid state. Examples of emulsions include mayonnaise, milk, lotions, etc. 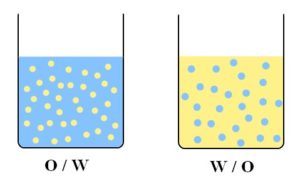 Whether an emulsion of oil and water turns into a “water-in-oil” emulsion or an “oil-in-water” emulsion depends on the volume fraction of both phases and the type of emulsifier used to emulsify them.

Relationship Between Concentration and Appearance

A boundary that exists between the dispersed phase and continuous phase is known as the interface. The emulsions tend to have a cloudy appearance because the phase interphases present in the emulsion scatter light at different wavelengths.

The color of the emulsion depends upon its concentration. Emulsions appear white when all light is scattered equally. In case of dilute emulsions, a low-wavelength light will be scattered more, and the emulsion will appear blue in colour. This phenomenon is known as the “Tyndall Effect”. If the emulsion is concentrated enough, the colour will be distorted to comparatively longer wavelengths and will appear more yellow.

In case of special classes of emulsions like nanoemulsions and microemulsions, the system appears translucent in colour. This property is due to the fact that light waves are scattered by the droplets only if their sizes exceed about one-quarter of the wavelength of the incident light. Since these systems have a particle size less than 100 nm, they have a translucent appearance.

These are surface active agents that are added to the emulsions to stabilize the two phases. It acts on the interface and increases the kinetic stability of an emulsion so that the size of the droplets does not change significantly with time, thus stabilizing the emulsion.

Emulsifiers are compounds that typically have a polar or hydrophilic (i.e. water-soluble) part and a non-polar (i.e. hydrophobic or lipophilic) part. Because of this, emulsifiers tend to have more or less solubility either in water or in oil.

According to the Bancroft rule, Emulsifiers and emulsifying particles tend to promote dispersion of the phase in which they do not dissolve very well. For example, proteins dissolve better in water than in oil, and so tend to form oil-in-water emulsions (that is, they promote the dispersion of oil droplets throughout a continuous phase of water).

A number of different chemical and physical processes and mechanisms can be involved in the process of emulsification.

Que: Which of these is not a form of instability in emulsions?

Ans, The correct option is “D”. Oxidation is not a form of instability that occurs in emulsions.

Share with friends
Previous
Properties of Colloidal Solutions
Next
Colloids