How many elements can you name? You know just nitrogen, oxygen, carbon? That’s it? What about actinoids? Do you know what these are? If not, don’t panic, we are here to clear your doubts regarding these new set of elements. Let’s learn about not-so-known elements.

Actinoids or actinides are 15 consecutive chemical elements in the periodic table from actinium to lawrencium (atomic numbers 89­103). As a group, they are significantly large because of their radioactivity. Although several members of the group, including uranium (the most familiar), occur naturally, most are man-made.

Both uranium and plutonium have been used in atomic weapons for their explosive power and currently are being employed in nuclear plants for the production of electrical power. 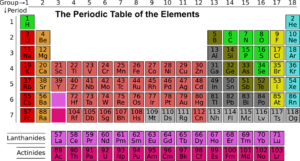 These elements are also called the actinide elements. However, the International Union of Pure and Applied Chemistry [IUPAC], the International body in-charge of chemical nomenclature, prefers the term actinoid, since the ‘-ide’ ending is usually reserved for negatively charged ions.

The first actinoids discovered were uranium in pitchblende ore by Klaproth in 1789 and Thorium by Berzelius in 1829. Actinium was discovered 1899 by André-Louis Debierne, an assistant of Marie Curie.

Location in the Periodic Table

Are all the actinoids found naturally?

Actinium, thorium, protactinium, and uranium are the only actinoid elements found in nature to a significant extent. The remaining actinoid elements, commonly called the transuranic elements, are all man-made by bombarding naturally occurring actinoids with neutrons in reactors or with heavy ions in particle accelerators.

Thorium and uranium are the most abundant actinoids in nature with respective mass concentrations of 16ppm and 4 ppm. Uranium mostly occurs in the earth’s crust as a mixture of oxides in the minerals uraninite also known as pitchblende because of its black colour. The abundance of actinium in the earth’s crust is about 5 x 10−15%. Actinium is mostly present in uranium-containing, but also in other minerals, though in much smaller quantity.

All actinoids, unlike lanthanides, are highly reactive with halogens. Thorium is rather active chemically owing to lack of electrons on 6d and 5f orbitals. Protactinium exhibits two valence states; the +5 is stable and the +4 state easily oxidizes to protactinium (V). Uranium has a valency from 3 to 6, the last being most stable.

Neptunian has valence states from 3 to 7, which can be simultaneously observed in solutions. Plutonium also exhibits valence states between 3 and 7 inclusive and thus is chemically similar to Neptunian and uranium. It is highly reactive and quickly forms an oxide film in air.

Americium shows the diversity from other actinoids by showing valency between 2 and 6. Valency 3 is dominant in all subsequent elements up to lawrencium with the exception of nobelium.

There is a challenge to develop stable and durable actinoid-bearing materials which provide safe storage, use, and final disposal.

Question: How are the actinoids extracted?

Answer: Owing to their low abundance, the extraction of actinoids is a complex and a multistep process. Fluorides of actinoids, which are reduced with calcium, magnesium or barium, are usually used because they are insoluble in water and can be easily separated by redox reactions. Among the actinoids, uranium and thorium are the easiest to extract.