Development Path of India & its Neighbours

We study the development path of India in comparison with Pakistan and China because of the similarities these countries exhibit with India in the sense that all the three countries set out on their respective development paths roughly around the same time. India and Pakistan became independent countries in 1947, while the People’s Republic of China came into existence in 1949.

All these countries followed the process of economic planning in the initial years of their development planning. India undertook its first Five Year Plan from 1951-56. Pakistan announced its first plan, called the Medium Term Plan in 1956. China announced its first plan in the year 1953. India and Pakistan placed a similar thrust on the relative importance of the public sector and social expenditure.

All three countries had similar growth rates till the 1980s. their per capita incomes were nearly around the same figure. India undertook economic reforms in 1991. Pakistan implemented reforms in 1988, while China did so in 1978.

In the development path of India, it first undertook the policy of closed trade. This was to give a thrust to domestic industries and reduce dependence on foreign products and companies. Thus, India followed what is called the import substitution strategy. Trade and interaction with the outside world remained limited. This outlook continued till 1991 when India finally decided to open its borders to free trade and liberalized its economy by allowing foreign companies to enter the Indian economy.

A thrust was given to employment generation under the Five Year plans. This was to make up for a rising population and lacking jobs to absorb the increased workforce size. Rural development was also given importance in India, for the important constituent it was of the Indian landscape.

Poverty alleviation came as a corollary of rural development and a part of the development path of India. India inherited a poverty-stricken economy from the British rule, which had destroyed its resource base completely. Therefore, poverty alleviation programmes and policies formed a major part of election campaigns and party promises.

The public sector was given significant importance, Private companies and industries were subject to strict regulations and standards. It was believed that the government was the sole protector of the people and would work towards social welfare.

China has always followed a communist ideology. Severely critical of the free market forces and capitalism, the Great Proletarian Cultural Revolution was launched in 1966-76 under the leadership of Mao Tse Tung. Following the revolution, China reformed its economy in 1978.

Reforms in agriculture allowed cultivators to keep the income from their lands after paying taxes. Industrial reforms were aimed at promoting collective local production. The public enterprises were exposed to foreign competitors as a result of the reforms. The goal was to generate enough surpluses to finance the modernization of mainland China. To this end, China set up Special Economic Zones (SEZs) to invite investors to set up economic units in its territory.

China was able to develop a strong healthcare system for its population. There were decentralized planning and equitable distribution of resources. However, development was slow under the Maoist rule. The rate of foodgrain production growth remained nearly the same in the 1970s as it was in mid-1950.

Like the development path of India, Pakistan also followed the import substitution strategy. This was achieved through tariff and other trade barriers that restricted foreign competition. The motive was to make foreign products expensive relative to domestic ones, thereby giving a thrust to domestic industries.

Pakistan follows a mixed economy system, where the public and private sectors co-exist. The green revolution was aimed to increase domestic food grain production in Pakistan. Until the 1970s, domestic industries were given priority. In the 1980s, importance was given to the private sector. New investment was invited and the economy opened up to the rest of the world.

Both India and Pakistan have benefited from a mixed economic system, in that they have been able to maintain high economic growth rates despite high rates of growth of population. The countries have been able to develop a service sector and have used technology increasingly in their production processes. Poverty remains to plague their economies, however. Unemployment is a major concern in India and Pakistan, as the working population is on the rise and commensurate jobs are less in number.

Pakistan has been able to show an easier structural shift of its workforce from agriculture to industry, and its people from rural to urban areas than India. It is working towards reducing the number of people below the poverty line. India has a clear edge over Pakistan in its research and development. India boasts of a skilled labour force as compared to Pakistan. Also, India is known worldwide for its scientists and technology, its discoveries in space culture, aviation and defence.

China ranks above India in its global exposure. It liberalized its economy earlier than India and has been able to reap the benefits thus forth. China has become an export-manufacturer and is a leading FDI hub for economies over the world, as India struggles only to find a marginal share in the international market. China has also successively reduced poverty levels and has controlled its population growth rate through the One Child Policy programme. 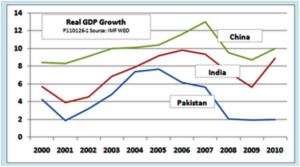 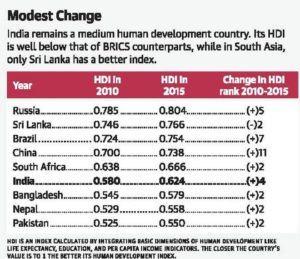 Question: Mention one similarity and one difference in the development path of India and Pakistan.

Answer: India and Pakistan are similar in the orientation of their economies. Both are mixed economic systems that allow both, the public and private sectors to co-exist. The countries differ in their political systems. India is the largest democracy in the world, with a multi-party system in place. Pakistan, on the other hand, follows an authoritarian military rule of power.