We all have learnt about the ill effects of Environment degradation in our lives. But have you ever considered the economic cost of environmental degradation? or the economic benefits of Sustainable Development? Let us educate ourselves about concepts.

This lesson breaks down the meaning and functions of the environment in the context of economic growth. The idea of environmental degradation, its causes and impacts are highlighted. The concluding section of the lesson introduces the concept of sustainable development as introduced in the Brundtland Report of 1987 and explains the way forward to save the environment.

Learn more about Need of  Organic Farming here in detail

Economics and the Environment

To understand the impact of economic growth and development on the environment, we need to be aware of the concept of sustainable development as an alternative solution.

The ‘environment’ refers to the totality of resources and the total planetary inheritance we have received. It includes biotic (animals, plants, birds, etc.) and abiotic (sun, land, water, mountains, etc.) components. It explains the inter-relationship that exists between the abiotic and biotic components.

Resources are limited and therefore, their over utilization is leading to their extinction. The waste generated is also exceeding the absorptive capacity of the environment. 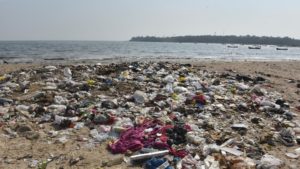 Rivers and other waterways are getting increasingly polluted due to the excessive dumping of wastes into them. This has led to poor water quality for consumption. The rate of use of non-renewable resources has not only depleted their limited reserves but also led to pollution tendencies.

The increasing emphasis is therefore on renewable sources or on devising other sources of generating energy. Different kinds of pollution have harmed the environment as well as man’s well-being. Air and water pollution particularly contribute to air and water-borne diseases and ill-health. Ozone layer depletion and global warming are other severe problems resulting from such degradation.

Environmental degradation can be broken down into particular problems that plague the global community, as under:

It refers to the gradual increase in the lower atmosphere of the Earth. The main cause of global warming is recognized to be the release of greenhouse gases like carbon dioxide into the atmosphere. These gases can absorb heat and thus, contribute to global warming. Other causes are deforestation and burning of fossil fuels like coal and petroleum. Global warming has led to melting of polar ice caps and an average increase in temperatures all over. 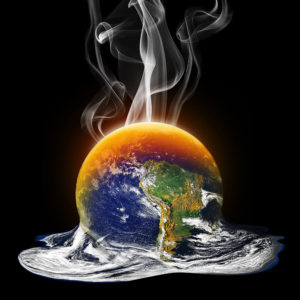 It is the phenomenon of depletion in the amount of ozone in Earth’s stratosphere. The main cause of ozone depletion is through the release of substances called chlorofluorocarbons (CFCs) into the atmosphere. These are compounds include chlorine, bromine compounds that are used as cooling substances in air conditioners, refrigerators, etc.

Ozone layer depletion implies that the Earth gets more and more exposed to the ultraviolet rays of the sun. These rays are excessively harmful to human health and are known to cause skin cancer to human beings. They also affect the growth of aquatic and terrestrial plants.

Measures to Save the Environment

Concerted efforts are required to deal with the global environmental crisis. The concept of sustainable development, thereby, comes into play. Some of the measures that can be undertaken to control the crisis that already underway includes:

The idea of environmental conservation gains real momentum if we are able to conserve resources and use them in a manner that they are sufficiently available for the coming generation as well. The United Nations Conference on Environment and Development (UNCED) defines this using the concept of sustainable development. It explains sustainable development as a process that provides for the present generation without compromising on the needs of the future generations.

Sustainable development has gained momentum as a larger movement over the years. We now associate it with improving living standards, poverty alleviation, nutritional improvements, minimizing social and cultural instability and resource depletion.

The Brundtland Commission lays emphasis on the idea of passing on an environment with enough and good-quality resources to the future generation, just as we have bequeathed from our previous generations.

The features of sustainable development include a sustained rise in per capita income (PCI) worldwide, rational usage of resources, pollution checks, population control and relative dependence on renewable sources of energy to meet future generations’ needs.

The Way Forward with Sustainable Development

The planet must shift to renewable sources of energy as compared to the regular thermal or hydropower plants that lead to climatic degradation. Solar energy is an effective alternative that we can harness using photovoltaic cells. It is less costly and environmentally friendly.

A shift to wind energy is also an option. Setting up windmills in areas with high-speed wind can help convert the natural resource into electricity for commercial or household usage. Another effective solution can come through the use of natural manure or bio-compost as a substitute for chemical fertilizers. This helps avert soil erosion and soil pollution. Subsidized LPG as a fuel in rural areas and CNG as a fuel for vehicles in urban areas could lead the way forward.

The rest of the change can come majorly through increased awareness and consciousness. Only when the gravity of the situation and a moral responsibility towards forthcoming generations is realized can we pass on a healthy environment to them.

Thanks for sharing this helpful information..it was easy to understand the content..good work..keep it up