Imagine a situation where you have to struggle to have a proper meal during the day. Doesn’t it sound weird? Don’t be shocked as this is the situation prevailing in many nations. The struggle to manage food resources is an issue which quickly impacts a region. If we skip a meal or two, hunger strikes with full swing. There have been several areas in India that are hit by famine and drought in the past, leading to widespread hunger. Hence, let us try to understand the importance of food security, storage and management in a precise manner.

What do you understand by the term ‘Food Security’? It is surely not the protection of food, but a larger concept associated to feeding the whole population. In simple terms, you can call it the ability to guarantee on a long-term plan an arrangement of nutritionally sufficient food supply.

Under food security, there are basically four stages which completely highlight its definition and motive. These are mentioned below: 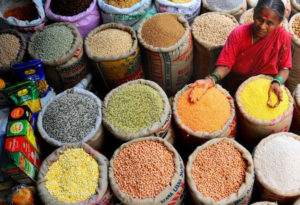 Presently, India is facing a situation which is called as the triple affliction of malnutrition. There are pieces of evidence gathered from national surveys combined with smaller studies that stress on this issue. For example, based on the National Family Health Survey(2005–06), a third of married women in India hold a BMI (Body Mass Index) less than normal. This also indicated that 28% men added to the same class.

Under-nutrition is a result of multiple factors; however, food security lies at the core of it. You can categorize food security as a situation where all people have physical, economic and social access to adequate, nutritious and safe food. In addition, the scheme works to fulfil their dietary requirements and food preferences for leading a healthy life.

In India, food security infers to the nutritional security and the fulfilment of individual capabilities. Also, people are the prime focus, even though community-level or household-level food security is a suitable concern.

How can you ensure food security in India?

First: Availability of food: Presence of enough food for all the persons

Second: Accessibility of food: Absence of barrier on access to food

Third: Affordability of food: Capability of all persons to buy food of acceptable quality

The outbreak of the National Food Security Mission has been a blessing for India. It has laid the foundation to augment production of cereals and pulses. Most of this has happened to support production increase across the eastern regions of India.

There has been a strong and ongoing trend concerned with the diversification of non-cereal as well as high-value supplies. Under high-value supplies, dairy, vegetables and fruits are included. Also, investments under the agricultural sector have stayed strong post the period 2004–05. This is associated to both public and private investments.

Sources of Foodgrains Across the Nation

One of the foundations of food security is the capability to grow self-sufficient. It means, the ability to harvest crops in the nation without any assistance from external sources. Currently, some of the prime food grain regions in India are as follows:

Q. How has the Green Revolution made India self-sufficient in terms of food grains?

Ans: Specifically in the late 1960s, the introduction of Green Revolution motivated Indian farmers to cultivate HYV (high-yielding varieties) seeds. This trend led to increase in the production of food grains, particularly rice and wheat. Moreover, after the outburst of Green Revolution India has avoided famines even during worse weather conditions.

Share with friends
Previous
Infrastructure
Next
Food Security In India