Do prices remain the same throughout or do they behave differently in different time periods? And if prices are ‘fixed’ and unchanging in the short-run, what possible impact could it have on the equilibrium output determination? This lesson on short-run fixed price analysis breaks down the effect of fixed prices in the short run on equilibrium output using AD-AS equations and diagrams. It also examines what happens when the AD curve shifts.

Fixed Price and the Short-Run

The key terms you must first look at are: ‘short-term’ and ‘fixed price’. In economics, we always distinguish between short-term and long-term. A short period of time, extending for usually less than a year, is called the short -run. A period of time longer than that is termed as long-run. Our variable of interest to carry out a short-run fixed price analysis is naturally, ‘price’.

What is the meaning of Fixed Price and why is it fixed in the Short Run?

By the term fixed price, we mean that price remains constant. They do not change as per demand and supply conditions in the short run. The reason behind this is that there are always chances that aggregate demand and supply do not equalize in an economy. Prices take time to respond to these conditions.

A single firm may not be in a position to influence prices as it might be contributing a very small share to the total market output. Therefore, firms might become individual price takers in the short run (like the case of perfect competition). For these reasons, in the short-run, prices remain fixed. Prices change in the long-run.

What is the Economic Impact of Constant prices in the Short Run?

In order for prices to be constant in the short-run, we must assume aggregate supply to be infinitely elastic.Why? An infinite elasticity of supply means that suppliers are willing to supply any amount that the consumers will demand at the given fixed price. If supply is not infinitely elastic, excess supply situations might arise and prices will have to change to adjust demand and supply for equilibrium.

Therefore, equilibrium is entirely determined by the aggregate demand. This is known as the effective demand principle. ‘Effective demand’ is the total demand which is met by the corresponding supply level.

As stated above, Aggregate Demand (AD) determines the equilibrium in the fixed price model. Let us understand the scenario using a two-sector economy with households and firms.

In this economy, AD equals the sum of Consumption (C) and Investment (I), i.e.

Here, ‘b’ is the marginal propensity to consume or the increase in consumption per unit increase in income. It is the slope of the consumption function and always lies between 0 and 1.

In the two-sector model, we take the investment to be ‘autonomous’ i.e. it is not affected by the income level and therefore, we may write:

We can now write the AD equation from (i) as:

To depict equilibrium diagrammatically, take income or output on the horizontal axis and aggregate demand on the vertical axis. We take the Aggregate Supply (AS) curve to be a 45º line to show all the points at which aggregate output equal aggregate expenditures. This is necessary to determine equilibrium. 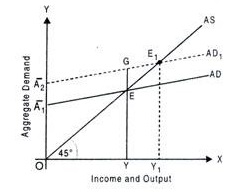 What happens when any of the autonomous components change?

Let us examine the situation where autonomous consumption increases from Co to C1. This causes a shift of the curve and AD shifts upward from AD to AD1. At the current output level, there will be excess demand (EG) but in the short-run, prices cannot change so quickly. So, the equilibrium must change. The new AD curve (AD1) intersects the 45º line at a higher point ‘E1’. This is the new equilibrium point and the corresponding output level has increased from OY to OY1.