The English language is full of confusing words that sound the same and spell the same. Two modern words are no different. Aid and Aide are homophones, which mean they sound the same when they are spoken, but when they are spelt, spellings are different and have different meanings. In this article, we will talk about the difference between these two words, i.e., Aid vs. Aide. The word Aid is very much used in economics. We can use it as a noun and as a verb also. The general meaning of word Aid is to help with material or with assistance. On the other hand, we use the word aide as a noun only. The meaning of this word is assistant or helper. So, in general, we can say that the difference between aid and aide is the same as the difference between help and helper respectively.

When we use word Aid as a noun, its meaning is to help someone practically. For example, ‘In the rural area, for some people government aid is the only way of earning’. Another example, ‘We shall have to work and aid our family’. This word ‘aid’ once added with some other words, it becomes as equipment. For example: ‘hearing aid’ or ‘visual aid’ or ‘first aid’. As a noun, it has other meanings also like, abet, assist, support, help etc. We will see more examples for Aid vs. Aide in the rest of the article. 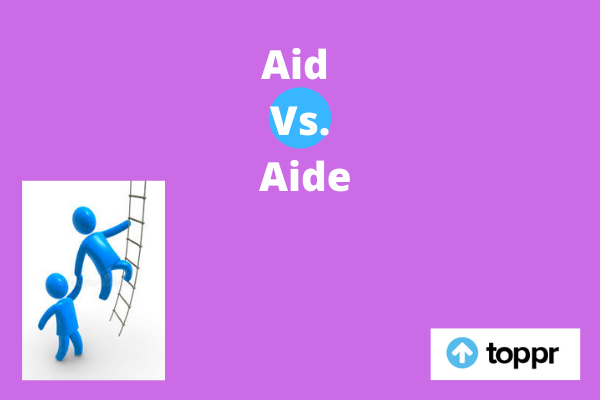 Difference Between Aid and Aide

For example, ‘Her researches aid to find a new drug’ or ‘Kids always need aid from their mothers’. Another example, ‘Please aid the child to do his homework’ or ‘Boss wants to aid his employee to overcome the financial crises’. The word aid can be used where people provide practical help to the poor. For example, ‘My father always provides aid poor children by distributing desserts among them’ or ‘Always try to aid poor people’.

On the other hand, we can use the word aide in the noun form and it means a person who assists an important person/government official. For example, ‘The King’s aide helped him to understand the situation’ or ‘The Governor asks his aide to write down what he is going to narrate’. Another example, ‘In day to day work, politicians are helped by their aides’. Or ‘The king was assassinated by his aide whom he trusted very much’.

When we use the words aid and aide together, good sentences are formed. For example, ‘our boss wants to aid his aide’ or ‘an aide of a former president told that the president wanted to aid him in the tough situations’.

How to Use Aid?

Correct: In India, lots of NGOs get international aid.

Correct: I tried to read a newspaper without a visual aid.

Correct: He aid the girl child foundation every year in memory of his mother.

2. Incorrect: The brave kid jumps into the water to aide his drowning friend.

Correct: The brave kid jumps into the water to aid his drowning friend.

How to Use Aide?

Correct: The Governor’s aide helps him to understand the laws.

Correct: A former aide wrote a book about his experiences with the President

Correct: An aide of a colonel was found dead under suspicious conditions.

Examples of AID – Using AID in a Sentence

Examples of AIDE – Using AIDE in a Sentence

Hope now you find it easy to tell the difference between Aid vs. Aide.