In the English language, homophones are those words and phrases which have sound alike but having a different meaning. Many times, homophones are very confusing for beginning writers as well as the language learners. A similar example is- borrow vs. lend where both are such homophones. These are considered as the common verbs which are confusing for many learners of English.

This is because borrow and lend have the same basic meaning, but these are used for different “directions” in the English language. For example- He often lends his car to his friend. Whereas, I often borrow his car. Actually, “lend” shows that something is temporary, given to some other person. On the other hand, “Borrow” shows that something is temporarily taken from some other person.

This article will be helpful for understanding borrow vs. lend usage in the sentences. These two words are troublesome for many English learners. They are having about the same meaning, and each word’s action goes in different directions.

Borrow is meant for taking something from another person, with the prior information that you will give it back to them. Whereas, lend is meant for giving something to another person expecting to get it back later. Thus, the sentences you asked about, both are correct. Hence, our choice of “borrow” or “lend” will depend on which direction is more important to you. So, imagine yourself in the middle of the picture. So, anything you “borrow” moves toward you. But, on the other hand, things you “lend” go away from you. 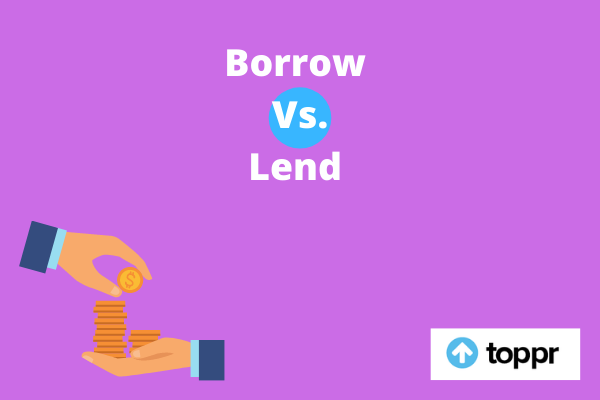 Difference Between Borrow and Lend

I have lent him some money for his help.

Bill’s borrowed some money from me for his purpose.

Therefore, we may say that both of these words describe the action of somebody temporarily giving something to somebody else. Also, these are used for the same situation but from different perspectives. As a remembering point, we may refer that If the subject of the sentence is giving then use “lend”. On the other hand, if the subject of the sentence is taking then use “borrow”.

Remember that, the prepositions which often follow the verbs are different. We borrow from someone, whereas we lend to someone. Let’s say you and I go shopping. I have to need to sign my name on the receipt, but, I do not have a pen. Then, I asked you, Can I borrow your pen to write? Here “borrow” word is used because I was thinking of the action as it relates to me.

When to use “Borrow”?

Some situations to use borrow in the sentences are given as follows:

We had to borrow money heavily from the bank to buy this flat. Here heavily is the adverb.

My neighbour often borrows things from my mother.

You had to borrow money from his parents occasionally. Here from is the preposition.

Incorrect: She used to lend them money, but not bother to pay it back.

Correct: She used to borrow the money, but not bother to pay it back.

Incorrect: the English language has lent many words from the French language.

Correct: the English language has borrowed many words from the French language.

Some situations to use lend in the sentences are given as follows:

Incorrect: Can you borrow me your pen?

Correct: Can you lend me your pen?

Incorrect: Please borrow me your laptop.

Correct: Please lend me your laptop.

Examples of Borrow – Using Borrow in a Sentence:

Examples of Lend – Using Lend in a Sentence: