Capital and capital are two words having almost the same pronunciation. These two are the homophones. This article will make an easy-going understanding of capital vs. capitol. There is a difference between “a” and “o”. Capital is the stash of money or the government headquarters of some state. Whereas the capitol is the building, that houses a government’s legislative branch. Also, capital can be used as a noun or an adjective too. Capital also refers to the uppercase letters in the alphabet. Also, it refers to the accumulated wealth or even the city which serves as the seat of a country’s government.

Remember that capital is the building where the legislative body of government does have meetings. For example, in the United States, the Capitol is the building in Washington DC. It is very interesting that only one letter separating them apart from each other. Thus capital vs. capitol is two easily confused words. Let us begin the understanding. 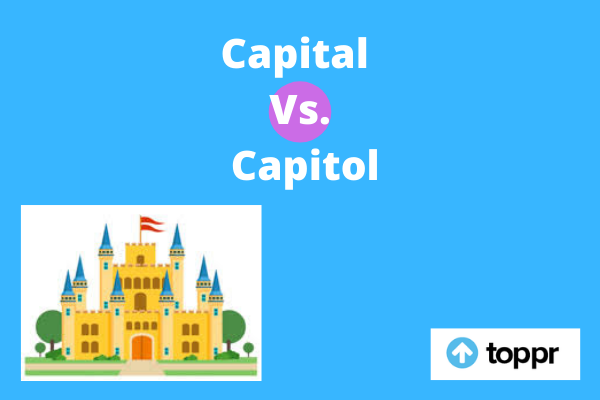 Difference Between Capital and Capitol

Capital is the word having an extension of the Latin word for the head which is caput. In its adjective form, this word has the meaning of the head in the literal sense. It’s the best example is capital punishment, which initially meant as beheading. We may see similar constructs in decapitate means cut the head off. Or in per capita means per person.

By the extension, it means something or someone which is the most important, as we can see in the captain. Similarly, other words are capital cities and capital letters. The use of the word capital for the sum of money is also popular. Capital many times includes the cash as well as the other financial assets held by any individual or by the business. For example – Capital can include the monetary contribution held in deposit accounts or the tangible machinery part.

Capitol is the extension of the Capitoline Hill in Rome, which was as a citadel for centuries. There was also a temple for Jupiter, represented as Jupiter Optimus Maximus Capitolinus.  The name was possibly derived from the same roots as capital. In modern times, the USA has Capitol building in Washington DC on Capitol Hill. For example, the capitol building which is located in the middle of the state is the capital.

How to use Capital?

This word is very versatile in English. It contains a variety of meanings, depending on the circumstances and usage. Thus its proper and careful use is very important. The word capital is used in five different ways with different meanings. These are given as follows:

The capital of India is New Delhi. Here it is a noun.

Do we have any capital invested in our business?

Another example. In the German language, every noun starts with a capital.

Our capital concern is that each resident must get fed during electricity failure. It is as an adjective.

That was a capital speech which he made as chief guest. It is an adjective.

Incorrect: Paris is the capitol of France as a country.

Correct: Paris is the capital of France as a country and not a state.

Incorrect: The judge was always against capitol punishment.

Correct: The judge was always against capital punishment.

How to use Capitol?

This word is used as a noun. A capitol is the building in which all legislature operates. There are countries like Cuba, Venezuela, and Colombia, who are having capitols. In some countries such as Norway, Canada, and Kenya, where legislative buildings are termed as parliaments. Thus, in the USA laws are passed in the Capitol, whereas in a country like the UK, they are passed in the Palace of Westminster and called the Parliament House.

Incorrect: London is the capital of England.

Correct: London is the capitol of England.

Incorrect: Paris is the capital city of France.

Correct: Paris is the capitol city of France

Examples of Capital – Using Capital in a Sentence:

Examples of Capitol – Using Capitol in a Sentence: