Counsel and council is a pair of confusing words. Council and counsel both are homophones. This means that they share the same pronunciation will have different meanings as well as spellings. So, there is content for “Council vs. counsel” to remove this confusion. Their meanings are similar due to having both words deal with giving advice. Council is used for a group of people who are assembled for some specific purpose. It means to discuss something or arrive at a certain decision. On the other hand to counsel means giving guidance to some person. This article will help to resolve the doubt due to council vs. counsel.

You should not replace “Counsel” and “council” with each other. This is because they define different concepts as well as completely different meanings. In short, we may say that “counsel” can be used both as a verb and as a noun too. On the other hand, “council” can only be used as the noun in a sentence. Also, it refers to a group of people who run a certain area in a country or even in a company. Let us understand this interesting difference here. 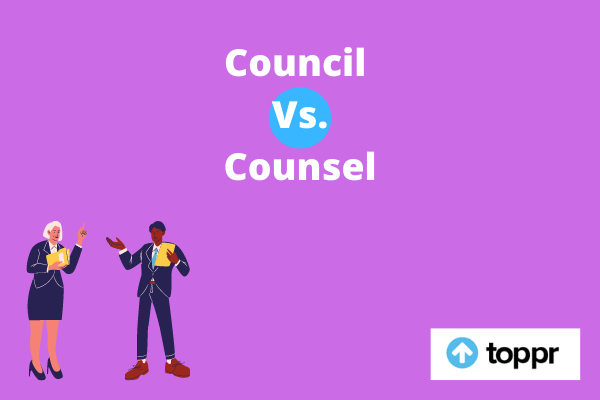 Difference Between Council and Counsel

The difference between these two terms can be understood with their meanings. It means while the council means the advisory or administrative body in any company or group which is formed to serve a specific purpose. Whereas, the counsel means to give guidance and which is given by an expert on a certain matter for helping to resolve issues.

If we use it instead of the word “counsel”, or vice versa, then it will definitely be a misspelling of a word. Firstly, the “council” is only defined as a noun and secondly, it also refers to some different concept than the “counsel”. Which means for advice or to give advice.

Council has a letter “c” whereas counsel has a letter “s”. If someone relates the second “c” in the council to the “c” in committee, then it will help to remember that the two words are synonyms.

When to use “Counsel”?

Thus, we may define the word counsel in many ways. In general, counsel is for advice to give instruction. Also, it may include the opinion or deliberation about a certain matter. In terms of the law, it refers to some legal adviser or an advocate. As a verb, counsel always means to advise.

For example- I should have listened to my counsel towards my parents.

Will the counsel for the defendant please rise the issues properly?

The word “counsel” defines a lawyer or a person who can speak for someone in the court. In English literature, we also used it as a synonym for advice.

For example- The counsel explained the legal aspects and further procedures to the stakeholders.

In addition, we use “counsel” mainly as a verb. It defines the action of advising someone to do something for getting a solution.

For example- I asked your brother to counsel me on my legal court case matter.

Incorrect: Will the council for the defendant please raise the issue in front of us?

Correct: Will the counsel for the defendant please raise the issue in front of us?

Incorrect: You should have listened to the council of your parents.

Correct: You should have listened to the counsel of your parents.

When to use “Council”?

A council is the group of people convened to give advice, consult, or even deliberate some matter. Unlike the counsel, which can serve as a verb, the council will always be like a noun.

For example- The council met to find out the course of action to take legally.

Council word can only be used as a noun for defining a group of people, elected to control something legally. Also, it can represent a group of people in some organizations, who are qualified for taking legal decisions.

For example- The Council of the city has decided to invite several foreign artists for the exhibition.

Another example- Our research council has decided to increase their activity during the summer vacations.

Incorrect: We will get to meet all our counsel members.

Correct: We will get to meet all our council members.

Incorrect: The Counsel is a mess at all.

Correct: The Council is a mess at all.

Examples of the Council – using Council in a Sentence:

Examples of Counsel – using Counsel in a Sentence: