When we read out these two words, Desert and Dessert, their phonics feels similar and rhymes to each other, but when we talk about the meaning of these words, they are entirely different from each other. This article will give some insight into words, Desert vs. Dessert, and compare their meanings with suitable examples. A ‘Desert’ is a barren, desolated area with little or no vegetation and most of the area filled with sand.

The other word ‘Dessert’ means a sweet treat and it a noun. Both the words can be differentiated based on the presence of the letter “s” in their spellings. In word ‘Desert’, has only one “s” whereas in the word ‘Dessert’, it has two s-es. You can use the word ‘desert’ as a verb also. If it is used as a verb, its meaning will be abandoned, in a way considered as disloyal or treacherous.

The other word ‘dessert’ is mainly used as a noun. When we serve a sweet dish at the end of a meal (lunch or dinner) we use this word. Example, please serve the dessert when we finish our dinner.  This article will elaborate more on Desert vs. Dessert and give you some relevant examples. 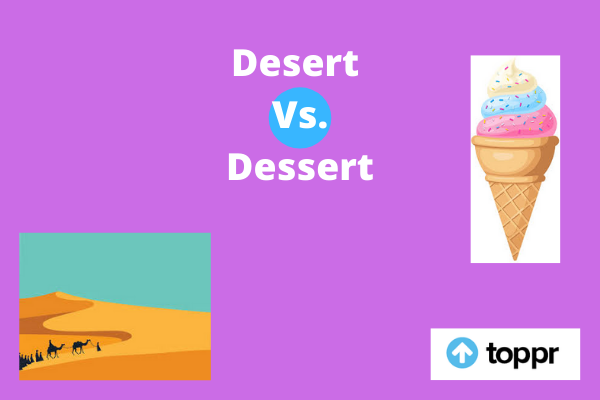 Difference Between Desert and Dessert

You can use the word desert as a noun, adjective, and verb whereas; the word ‘dessert’ is used as a noun only. This shows that according to the situation, the meaning of the word ‘desert’ is being changed. You can use the Desert as a verb and its meaning changes according to the situation. When the place appears empty and fewer people are there, we call it a deserted area. Example, tourists generally avoid deserted places.

When we describe the land filled with sand and with less or no vegetation, we use this word. For example, ‘The Sahara desert is the world’s largest desert’. Another example, ‘Deserts are hard places to live without water’.

On the other hand, when we want to offer a sweet dish at the end of the meal, we say it as dessert. For example, ‘It is nice to have desserts on special occasions like birthdays’.  Another use of dessert is for chocolates, candies, etc. For example ‘Kids always like desserts but mothers avoid giving them daily’. Also, when someone needs some sweets, (s) he can use this word. For example, ‘please serve the dessert when we finish our dinner’.

This example, ‘A cold dessert is very desirable in the hot desert’ uses the words, desert and dessert, beautifully in one sentence.

How to Use Desert?

Correct: She got trapped in a deserted mall.

Correct: The Gobi desert is a cold desert.

Correct: He deserted his wife and daughter and left from the home.

Correct: Her luck deserted her to catch the train.

Correct: People deserted the place when they heard a police siren.

How to Use Dessert?

Correct:  I love the desserts after dinner.

Examples of DESERT – Using DESERT in a Sentence

Examples of DESSERT – Using DESSERT in a Sentence