Eg and ie both are the Latin abbreviations. Eg stands for exempli gratia and its meaning is “for example.” Ie is the abbreviation stands for id est and its meaning is “in other words.” It means these two are looking very similar, but have different meaning and usage in the English language. Always remember that “E” is for example (eg) and that I and E are the first letters of “in essence”, an alternatively its English translation is i.e. It is not uncommon to see “ie” used where “eg” also have been used, and vice versa. This article will definitely remove the doubts regarding eg vs. i.e.

Actually, it is one of the most common mistakes done by writers. So there are many chances of confusion due to eg vs. ie For example, how could such simple abbreviations perplex even the most experienced writers and poets?

Thus, continue the reading to learn about these puzzling but very common abbreviations.

After my work, I will walk over to that new sports arena, i.e., the Cricket stadium.

After my work, I will walk over to a sports arena, e.g., a Cricket stadium or Volleyball Court. 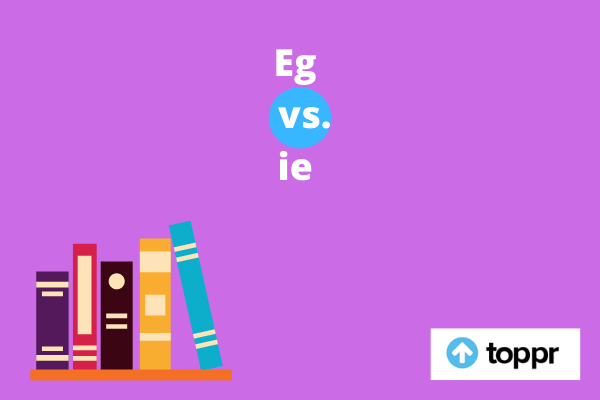 Difference Between Eg and I.e

As anyone may guess, and use it to introduce one or more examples. But, no need to worry about listing the possibilities. For example, eg is used to introduce a few examples but not the complete list.

On the other hand, i.e. is meaningful when otherwise an explanation is needed for something. Many people confuse this with the expression of e.g.. Whereas, this one does not have to do with listing the examples. As we know that i.e. is the phrase from the Latin origin, which translates to English as “that is to say” or also as “in other words.”

For remerging this, we may associate the “i” of i.e. with the “i” of “in other words.” Similarly, imagine that the “i” and “e” stand for “in essence.”

E.g. and i.e. both words are written in the lowercase when they show up in the middle of an English sentence (i.e., like this). Most American style recommends a dot or period after both the letters in both abbreviations.

Generally, we add a comma after e.g. and also in between each subsequent example having many more items on the list. If someone wants to give the examples or narrowing-down set apart from the rest of the sentence, then he can enclose e.g. and i.e., with the examples. Although, exempli gratia and id est both are Latin and written in italicized, still there is no need to put e.g. or i.e. in italics form when they are in abbreviated form.

How to Use Eg

E.g. is used to give one or more possible examples in some scenario. It is a signal that we are seeing one or a few of multiple possibilities. The term e.g. is very popular as an abbreviation in English. This term is useful to introduce examples of something which has already been stated. For examples:

They always play card games during their travel on the weekend (e.g., poker, gin rummy, etc).

Ie is used to clarify for providing more precise information. It means e.g. opens up more options, whereas i.e. narrows them down to some specific meaning. This abbreviation is used when the writer is elaborating his claim or rephrasing the claim to clarify his points, to make it more precise. Capitalize i.e. only when it is at the beginning of a sentence. For examples:

Jumping the rope while the shoe lashes are untied is dangerous, i.e., someone could severely injure yourself.

Cricket is one of the most popular sports in India, i.e., it earns millions of revenue each year in ticket sales.

Examples of Eg – Using eg in a Sentence:

Examples of I.e – Using ie in a Sentence: