As jealousy and envy have almost similar meanings, people tend to confuse these words together. The difference can be whether you have some claim on the object which you desire. For instance, your favourite celebrity gets to wear a beautiful blue dress and you say ‘I am really jealous of that’. However, in technical terms, you cannot be jealous. Why? Because unless that dress is yours and the celebrity stole it from you, you cannot say it. In place of that, you will say that you envy the dress and was envious that the celebrity gets to wear it. Thus, when we talk about envy vs jealousy, we notice that the difference is the emotion of coveting what someone else has and one relating to fear that it might be taken away from you.

When you take a quick glance at analyzing envy vs jealousy, you will notice that they do refer to almost the same thing. Whether you feel envious or jealous, the feeling is not a good one. In other words, both are negative feelings which occur when someone else has something that you don’t have but desire to own. However, taking a closer look will help you see that these two terms have slightly different impacts. Through this article, we will study them in detail. 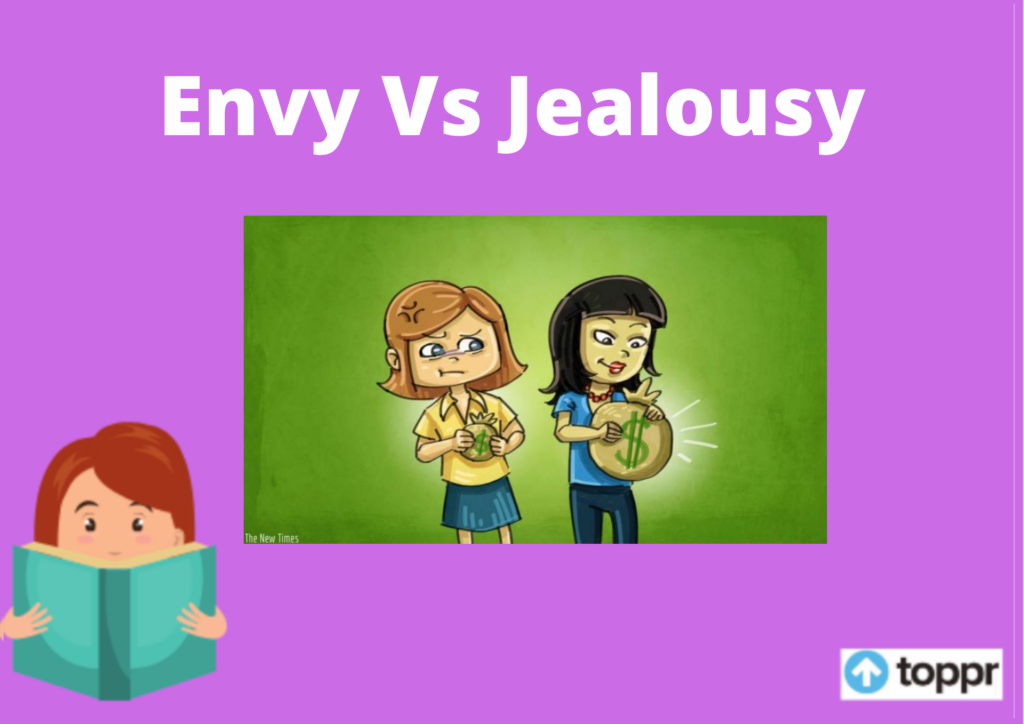 Difference Between Envy Vs Jealousy

Even though these terms define the same feeling, they have subtle differences. Especially when you are writing, it is important to understand these subtleties when you use these words. It is because the small details carry a lot of weight and also express a message. Thus, depending on the meaning, intensity, context and impact, we will make use of jealousy and envy accordingly.

These words basically add colour to your writing as they can capture how the character is feeling. For instance, what would Othello by William Shakespeare without jealousy or envy? For that matter, this applies to most of his work.

So, while you may think that these two words are synonymous, they are actually not. In order to understand the subtle difference, you must look at these words carefully. We use both of these words as nouns mainly as they mean the desire of having what someone else has.

Moreover, you can also use envy as a verb. Similarly, both of these words carry feelings of anger or unhappiness which are a bit more aggressive. Thus, the easiest way to remember their difference is that envy is an emotion when you wish to possess something that someone else has. On the other hand, jealousy is when you fear that you may be replaced in the affection of someone you love or desire.

When/How to Use Envy

When we use envy as a noun, we mean that it is a feeling where one wishes something someone else has. However, it is not necessarily a feeling of anger or frustration. Thus, more than unhappiness, it is about the desire of possession.

Further, when we use it as a verb, it means the same thing only. That you wish you had that thing which the other person has. Thus, you must use it in the correct place to ensure that your feelings are being conveyed correctly.

For instance, when someone watches your new car with envy. As we are using it as a noun here, it means the feeling to possess your car which you own. As a verb, you can say they envy how well we matched and completed each other in the marriage. Thus, it means the other person wishes they had the same bond as your marriage.

Let us take a look at the correct and incorrect use of envy vs jealousy:

Incorrect: Knowing the frustration she will experience, I am not jealous of Kathy one bit.

Correct: Knowing the frustration she will experience, I do not envy Kathy one bit.

When/How to Use Jealousy

When we talk about jealousy, we see that it is a feeling of unhappiness or anger which we feel when somebody else has got something that they don’t. Thus, it is not mostly about craving or desiring something which someone else owns, but the frustration or anger of not having it.

In other words, it is the feeling of the anger of not being able to possess that thing rather than the wish of possession. Thus, we use jealousy to express this type of feeling. For instance, when an unmarried person has an intense feeling of jealousy when they see how happy their friends are in their marriage.

Thus, the person does not want their partner. But they want to feel the feeling of being happy in a marriage. So, they do not wish to possess it but they are just unhappy at the fact that they do not have it.

Let us take a look at the correct and incorrect use of envy vs jealousy:

Incorrect: The only thing envy did was make them miserable.

Correct: The only thing jealousy did was make them miserable.

Examples of Envy – Using Envy in a Sentence

As we tend to often confuse envy with jealousy, we will take a look at some examples of using it in a sentence to get a clear picture. Jealousy usually takes three parties to occur but envy only takes two. Envy is when you internally long for something which the other person has. For instance, a possession or a personality trait. It is also a rampant theme in literature. These examples will help you get a clearer picture of how to make use of this term correctly:

Examples of Jealousy – Using Jealousy in a Sentence

Jealousy defines a feeling of protectiveness or insecurity one may have over a rivalry or being replaced. This usually occurs in a significant relationship and needs three people like you, the significant person, and another to happen.  These examples will help you get a clearer picture of how to make use of this term correctly: