It is quite common to confuse explicit for implicit or vice versa. If you have not done that, you have surely wondered whether to use the former or latter. We generally get confused between words that have similar spellings. However, this makes it important to understand what every word actually means and that you will always use them correctly in the future. That is why we will be focusing on explicit vs implicit in this article to get rid of all kinds of confusion for once. While the sound of both these words may seem similar, their meanings are quite different.

In fact, the meanings of these two words are actually the complete opposite. Their similar sounds confuse us but their meanings can help us differentiate between them easily. As their meanings are different, one must be sure of it to use it in the right one. Implicit is when we state something indirectly or imply it. On the other hand, explicit is when we state something in a direct manner and spell it out. Thus, after going through our article, you won’t have to wonder whether it is explicit or implicit. 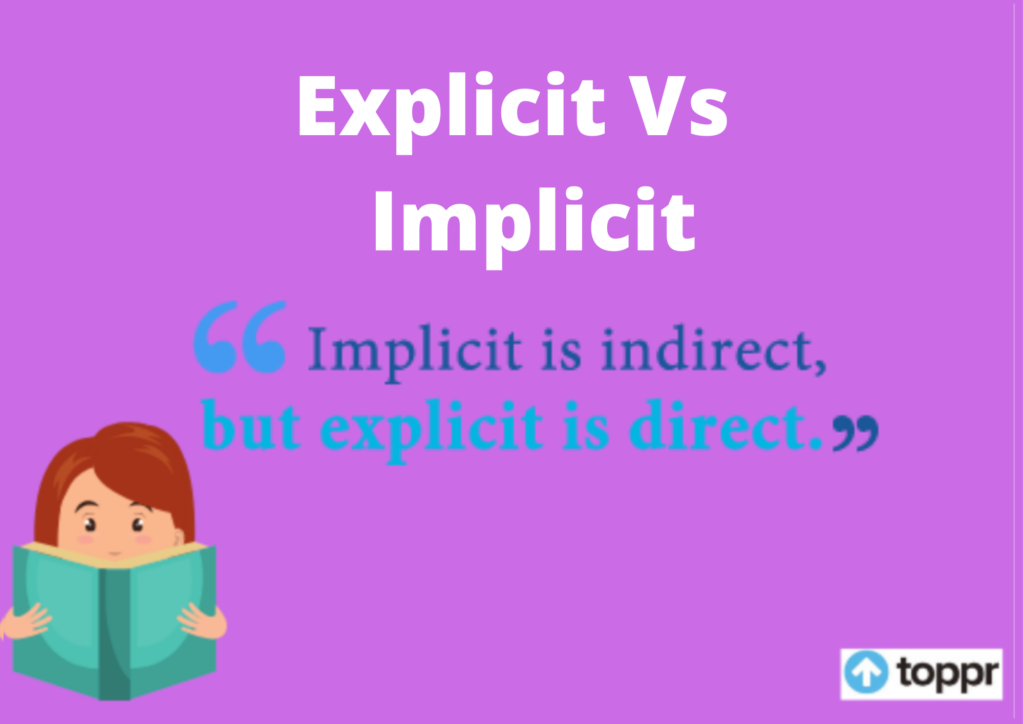 Difference Between Explicit Vs Implicit

Both the terms explicit and implicit are adjectives which we use commonly in English. However, we use them both in different contexts. When we talk about explicit, it refers to something very exact which we clearly explain in the first place.

Moreover, we also use explicit when we refer to a very detailed sexual or violent scene. This is generally found in a movie or in a book. Thus, explicit vs implicit is of utmost importance to understand and use correctly.

On the other hand, implicit might appear to be similar to explicit and even sound similar, but it is nothing alike. In fact, it is the complete opposite of explicit. We use it when we refer to something which we do not state directly.

That is to say, implicit is suggested or understood either way. Further, as a secondary signification, we can use implicit as a synonym for complete. Thus, we will now move on to the uses of these terms.

When/How to Use Explicit

When we say implicit, we mean something which we imply or make understand not in a plain manner or express it directly. Thus, we call something implicit when we do not directly state it but suggest it to effectuate the purpose.

For instance, there is a morality implicit in her writings. Thus, you see that the writer may not have clearly or directly laid out a moral vision but its characters, actions and experiences suggest it.

Let us take a look at the correct and incorrect use of explicit vs implicit:

Incorrect: Danny explicitly said he likes white shirts by saying he likes all colours but tan.

Correct: Danny implicitly said he likes white shirts by saying he likes all colours but tan.

When/How to Use Implicit

When we say explicit, we mean to fully and clearly express something. Moreover, we leave nothing implied. Thus, it is when we clearly state or spell out something. Thus, we leave no room for confusion, like when writing a contract.

Thus, we use explicit to demonstrate something which is clear and unambiguously expressed or stated. Moreover, we also use the word explicit when describing a violent or sexual scene.

Let us take a look at the correct and incorrect use of explicit vs implicit:

Incorrect: Tina implicitly told her younger sister to not attend the concert.

Correct: Tina explicitly told her younger sister to not attend the concert.

Examples of Explicit – Using Explicit in a Sentence

We will now take a look at some examples of using explicit in a sentence to help you understand it better:

Examples of Implicit – Using Implicit in a Sentence

Now let us look at some examples of using implicit in a sentence to help you understand it better: