Lead and led, these two words are similar in respect to their pronunciation. Here, we will study lead vs. led. The word lead is a present tense verb which means to guide. It is also used as a noun, which refers to the metallic element for example a lead pipe. Lead is being pronounced as “leed” having rhymes with the word “bead”. It can be used as the adjective, noun, or verb in English sentences.

It is clear that all of these meanings of lead are like that being in-charge, being ahead of someone, or being in front of something. On the other hand, “Led” is a verb and is the past tense form of lead. This is only one popular usage of it. It is defined as to show the way by going in advance and also to guide or direct in some course.

We often get confused about where and when to use lead vs. led.  They may be pronounced alike, although having different spelling, as ”A” is there in the word “Lead” and, but “A” is missing in the word “Led”. Understanding the difference between these two, as well as defined as parts of speech are easy but important. This article describes lead vs. led in a very simple and clear way with examples showing their usage. Let’s get started with interesting learning for lead vs. led. 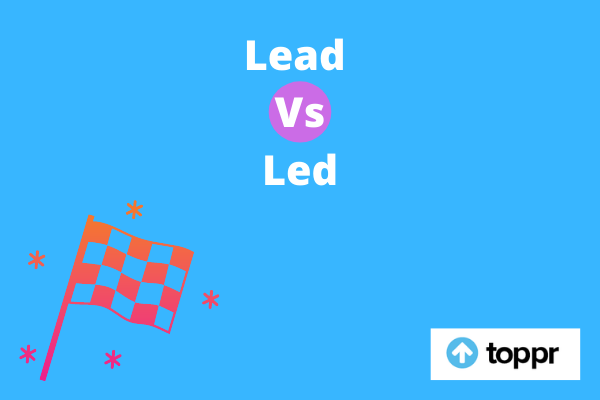 Difference Between Lead and Led

The confusion between “lead” and “led” typically stems from the way that the different meanings are pronounced. Word “Lead” is depending on the meaning, with respect to its function as a noun, adjective, or the verb. The main confusion comes into play when it is used as the verb in sentences. The most common definition of “lead” as a verb meant for “to show the way”. So, lead is the present tense form of the verb.

When we used it as a verb, then “lead” rhymes as “bead.” While as a noun, “lead” rhymes with the “bed”. Actually, as a noun, it meant as a type of metallic element. Also as a noun, the “lead” word is rhyming with “bead” to refer to the animal’s leash or to the first position.

To get a better understanding, let us have some examples. “She leads the group with confidence and pride”. Here, it is a verb meaning as shows the way.

“The man in marathon runner was in the lead.” Here “Lead” is referring to someone having the first position.

Ramesh is the choice of selectors for a lead cricketer. Here “Lead” is used as the adjective that modifies the word cricketer.

One simple rule we may follow. If we may substitute the words guided or directed into the sentence, then we should be using the three-letter “led”.

How to use Lead?

This word is a very versatile word having different kinds of roles in English sentences. It will have a different meaning in the sentences depending upon the way of using it there. It may be used mostly as a verb. Besides this, we may use it as a noun as well as an adjective. Let us have some correct and incorrect usage of it in various scenarios.

Correct: Lead the team back to the camps.

Correct:  After the first half, the lovers took the lead.

Correct: Keep this pace up. We are in the lead.

Incorrect: He is performing a role in the movie as a lead.

Correct: He is performing a lead role in the movie.

How to use Led?

As we know that, led is the past tense of the verb lead. To have its proper usage, let us have some suitable examples for “led” as follows:

Incorrect: She lead the party through the marshland last year.

Correct: She led the party through the marshland last year.

Incorrect: That major accident leads to an astonishing discovery.

Correct: That major accident led to an astonishing discovery.

Incorrect: Our father leads us to believe we were welcome guests.

Correct: Our father led us to believe we were welcome guests.

Examples of LEAD- Using LEAD in a Sentence

Examples of LED – Using LED in a Sentence