For example, ‘We spelled him out as he is not fit to play the cricket’. Another meaning of the word spelled as a noun is spent a short period. For example, ‘He spelled out his job as a doctor in the cardiac department also’.  So have patience, we will discuss further in the rest of the article about the differences between Spelled vs. Spelt with more examples. 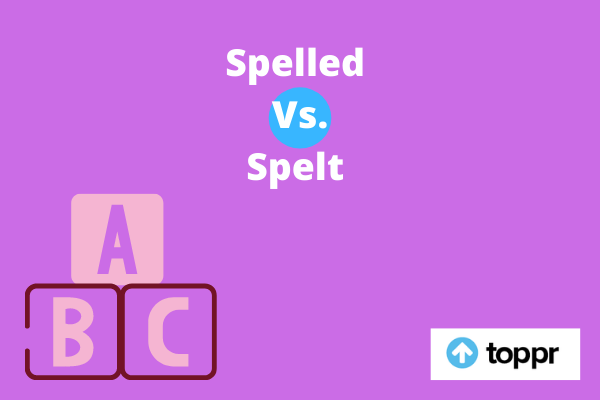 Difference Between Spelled and Spelt

For example, ‘poem spelled out in the auditorium and all the audiences were kept silent’ or ‘in a writing job, specifications should be clearly spelled out’. Although there are no distinct differences seen in the use of both the forms (spelt and spelled) in British history, the word ‘spelt’ was more commonly preferred than ‘spelled’.

On the other hand, word spelt is used in the noun form as well as the past and the past participle tense of the word spell. For example, ‘the cultivation of spelt is being done in Europe and this fact is spelled out in the books’. Here, you can see the use of both the words, spelt and spelled. In the above example, we are using the word spelt as a noun and the word spelled as a verb.

How to Use spelled?

Correct: You spelled my name wrong.

Correct: You should have spelled it correctly.

How to Use Spelt?

Correct: Spelt is a type of wheat grain.

Correct: Spelt is a good source of carbohydrates and fibres which reduces the risk of obesity and heart diseases.

Correct: Earlier the cultivation of spelt was prominent in south-east Asia and Australia.

Correct: He spelt out little letters on his sister’s birthday.

Correct: Even though the performance of the captain was good, he was spelt out from the team

Examples of SPELLED – Using SPELLED in a Sentence

Examples of SPELT – Using SPELT in a Sentence