Then and than are similar-sounding words. But they have different meanings and uses. This article explains then vs. than in detail with examples. ‘Then’ is used to establish the time of actions. It usually works as an adverb modifying verbs, adjectives, or other adverbs. For example, You need to have lunch first and then take medicines. It also means that time and here it functions as a noun.

For example, I wanted to have pizza but then was not the right time. It can also work as an adjective meaning at that time. For example, My then teacher was a very humble person. ‘Than’ is used to compare two different things. It is a Conjunction. For Example, My dress is better than yours.

We often get confused about where and when to use then and than. They have many similar features such as they are spelled alike, except for the E in then and the A in than. Though these two words are identical and homophones but they are way different in their meaning. Understanding the difference between them, defining them, and using them as parts of speech is easy. This article explains then vs. than very clearly and also their usage. Let’s get started with learning! 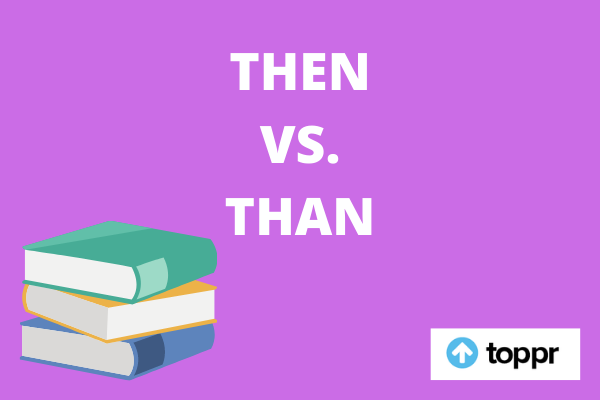 Difference Between Then and Than

Then is usually used as an adverb. An adverb modifies the verb, adjective, or another adverb in the sentence. Then has different meanings as an adverb such as at that time, at that time, in that case, next in order of place or time, soon afterward, in addition, or as a consequence.

Then also is used in some idioms. Example, ‘Then and there’, ‘now and then’, ‘if wishes were horses, (then) beggars might ride’, etc. It’s also used in if … then constructions such as If you do not finish your homework then I will not allow you to play.

Than is usually used as a Conjunction. A conjunction is a word that establishes a connection between two clauses or coordination between two words in the same clause. Than is often used to make comparisons. It also shows the rejection in the choice of preferences. For example, Anuj makes better reports than Anand. Sometimes, than can also work as a preposition.

A preposition is a word that joins a noun or a pronoun to a verb or adjective in a sentence. Than when used as a preposition means ‘in relation to or by comparison with’. For example, Kunal is a person than whom there is none kinder. Than also forms a part of a lot of idioms such as ‘more dead than alive’, ‘better late than never’, ‘easier said than done’, etc.

How to Use Then

Correct: I was at the library then.

Correct: We saw the play and then went out for dinner.

Correct: If you complete your study, then you go out to play.

Correct: I wanted to sing but then was not the right time.

Correct: I wanted to break the fixed deposit but then was not the right time.

Correct: My then boss was a very good decision-maker.

Correct: The agreement was signed was my then manager.

How to Use Than

Correct: Ajay has less than I have.

Correct: He would rather sleep than go for a walk.

Correct: Shawn is taller than I am.

Examples of THEN – Using THEN in a Sentence

Examples of THAN – Using THAN in a Sentence

1. Bob runs faster than I can.

2. BMW is better than Audi.

3. Rey cooks better than me.