While and whilst are quite similar words which we use a lot but don’t really understand the difference between them. Some might think they are the same words, however, that is not the case. You can only use them in certain places in the correct manner. We will help you in removing the confusion you may have regarding while vs whilst. Further, you will be able to use it correctly after this. Of course, we all use while more than whilst. Why is that so? Many people consider whilst to be outdated. However, those who follow British English still use this word.

Thus, a major difference between while vs whilst is that we can use while as conjunction, preposition, noun or verb. However, we can only use whilst as a conjunction or adverb. Thus, they are both simple terms but must be understood correctly to use them accordingly. Being quite a versatile word, while can become many parts of speech, depending on the context. In other words, whilst was popular in older English but in modern times, its usage has decreased. 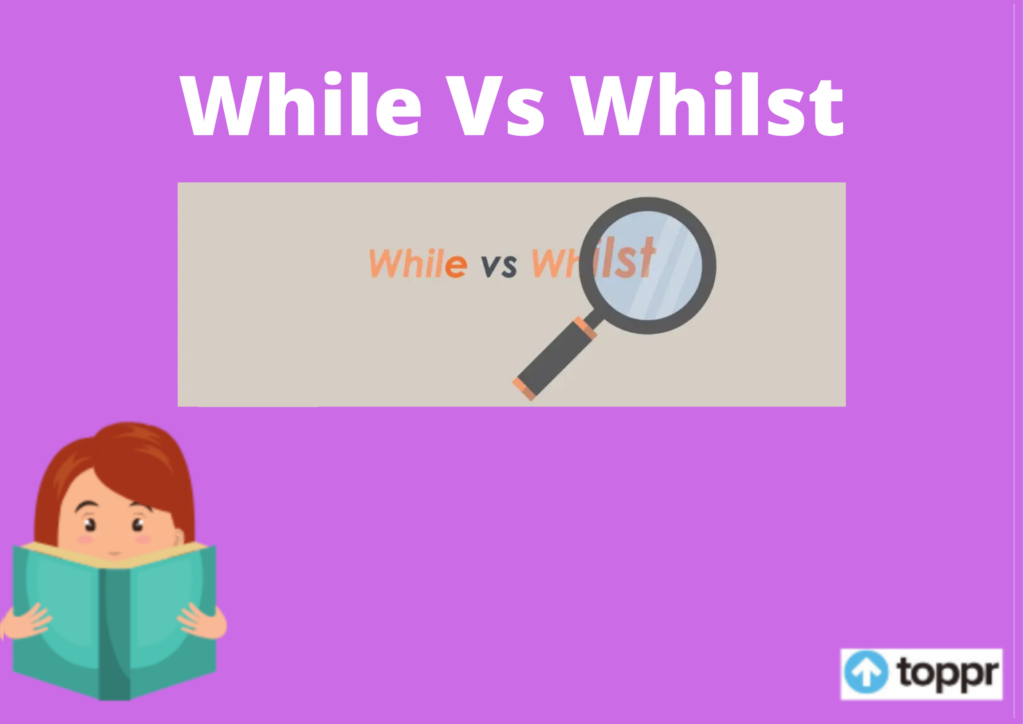 Difference Between While Vs Whilst

In British English, while and whilst can be used interchangeably. However, being an American or writing to American readers, it is advisable to use the word while. It is so because most Americans find the term whilst to be quaint, old-fashioned and even literary.

On the hand, most Britishers will be more than happy to swap between while for a whilst. However, some of them also consider whilst to be a little outdated. Thus, we see that the difference between while vs whilst is about the region mostly.

Some people also believe that we must use whilst for a short period of time whereas while must be used for a longer period of time. For instance, swim while the weather permits. Next, swim whilst the tide is rising.

When/How to Use While

We can make use of while as a noun, adverb and a verb. It is common in both American and British English. Moreover, it replaced the word whilst in American English gradually.

In fact, the same goes for British English. While did replace whilst in most contexts. Although, British English does use whilst more frequently when we compare it to American English.

All in while, nowadays, whilst might seem to be more formal and while to be more casual. Thus, we use while instead of whilst. Nonetheless, in circumstances where formality is desired, people choose whilst like a wedding invitation, graduation ceremony and more.

Please remember that we can use while as a noun as well as a verb. But we cannot do the same with a verb. Let’s take a look at the correct and incorrect use of while vs whilst:

Incorrect: We danced for a whilst.

Correct: We danced for a while.

When/How to Use Whilst

We can use whilst to mean at the same time or to indicate contrast like the term whereas. It is an old word which has its origin from Middle English. It was first made use of in the 14th century.

It is more common to use whilst in British English. However, you will rarely find this word being used in American English, even on formal occasions. Thus, you see that it is acceptable in some places only.

For instance, I shall start preparing for lunch whilst you go to the store to buy vegetables. Let us take a look at the correct and incorrect use of while vs whilst:

Incorrect: They used to whilst away the long summer days at the beach.

Correct: They used to while away the long summer days at the beach.

Examples of While – Using While in a Sentence

In order to understand the correct use of this term, we must take a look at their examples to use them correctly in sentences:

Examples of Whilst – Using Whilst in a Sentence

We will now go through some examples of using whilst in a sentence to help you understand its usage in a clear manner: