Summary of Rain on the Roof

This is the rain on the roof summary in which the poet tries to describe how he feels on a rainy day. The poet states that whenever it rains he starts to recall all his past memories. While lying on his bed in the cottage he listens to the pitter-patter sound of the rain. As he listens to the sound of the rain he starts to remember his old days when he was a little boy. Further, he remembers her mother who is not with him now, but her memories will always be with him. In addition, he remembers how her mother takes care of him during the rainy days so that he might not catch a cold. While listening to the sound of the rain, he remembers all the sweet memories of his past. 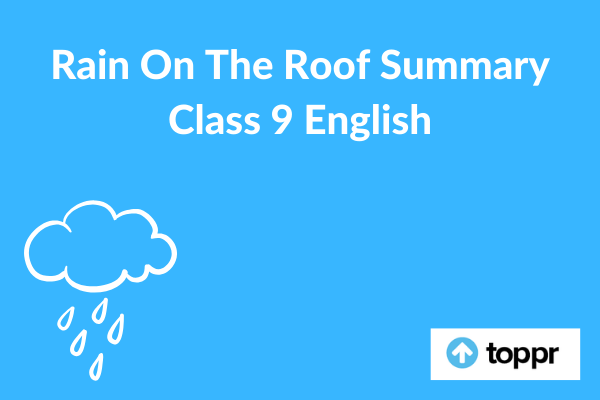 Rain on the Roof Summary in English

Then, huge clouds that are full of moisture move around in the sky. And the raindrops that seem like a tear falling from the sky wipe the sad darkness of the night. Moreover, the poet is comparing the raindrops to tears as to him the dark sky seems very sad. Also, it appears as if it is weeping and the raindrops are the tears shed by it. He further adds that it is like a blessing to lie on the bed in his room. And listen to the sound made by raindrops falling on the roof.

In the next part, the poet expresses his feelings when he hears the raindrops falling on the roof of his house.  Poet says that every tinkle on the shingles has an echo in the heart. Whenever he hears raindrops falling on the rooftop its sound repeats in his heart and in his dreams. Further, he has many different and fantastic imaginations. Also, the falling drops of rain on the rooftops creates many new different dreams in his mind. For instance, he recollects many memories of the past which come back into his mind as dreams. Hence, he listens to the patter of the rain upon the roof, he has many new dreams in his mind. And his memories of the past come back in the form of dreams.

In the last paragraph, the poet introduces his mother and says that he is dreaming of his mother. As in the previous stanza that rain brings memories of the past. They were the memory of his mother who is no longer alive. Long ago, his mother uses to love him a lot and she uses to consider him a darling. Also, she would let him sleep until daybreak and have sweet dreams. As he listens to the song made by the raindrops falling on the rooftop of his room he feels that his mother is looking at him.  Moreover, the sound of rain makes him correlate his past with his present. That’s the reason he was so moved by the sound of the raindrops on the shingles of his room. Every time he hears this sound it brings back memories of the past as he reminds of his mother.

Read Summaries of Other Chapters here –

Conclusion of Rain on the Roof Summary

In this poem, whenever the poet hears the pattering sound on his rooftop he remembers sweet memories of his childhood especially one that relates to his mother.