Summary of The Adventure

The Adventure summary simplifies the chapter and makes the students understand it in an easy manner. The story centres on a certain historical event with the Historian, Gangadharpant, being the protagonist. This story is written by Jayant Narlikar and shows us how Gangadharpant aka Professor Gaitonde, time travels. It begins with the professor wondering about the fate of India if the Marathas had not allowed a concession to the East India Company to stay in Mumbai. He believes this step and the error of Maratha soldiers during the battle of Panipat cost a great deal. As he is reading from the Bakhar about Vishwa’s narrow escape in the battle against Abdali, he meets with an accident. Thus, the transitions from one world to another and through this story we learn about his new world he transitions into. It is a great lesson with the perfect blend of history and science. 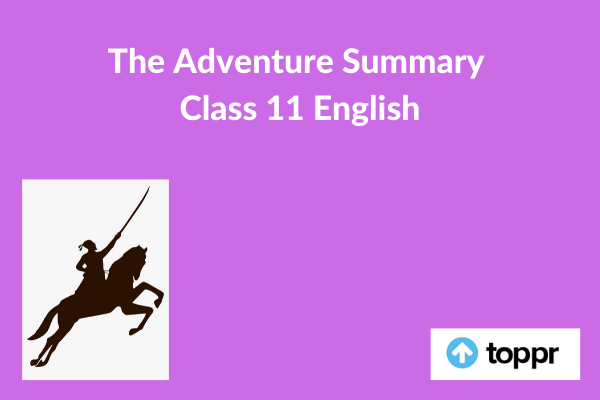 The Adventure Summary in English

Jayant Narlikar wrote The Adventure in a very informative and interesting form. He has given the student the perfect combination of history and science. We see that a historian, Professor Gaitonde somehow time-travels into the past. Upon going in the past, he experiences something which was never there before. He finds himself in the city of Mumbai that he has never witnessed.

The Mumbai he is presently in is very different from it actually is. He gets down at the Victoria Terminus Station where he finds it to be very clean, surprisingly. The coaches of the train read out ‘Greater Bombay Metropolitan Railway’. Moreover, the staffs were of Anglo-Indians and a few British officers.

Upon getting off the station, Gaitonde saw the East India Company Headquarters. Similarly, there were buildings of mainly British brands and British banks. In fact, his son’s workplace of Forbes was not even there. Thus, in order to solve the riddle, he went to the Library and read about the battle of Panipat. Upon reading, he finds out the details to be different from actually happened. In fact, he also reads that the British rule never made it to India which surprised him.

After the visit to the library, he visited the Azad Maidan and got into a fight over there with the audience. After being thrown off stage, Gaitonde came out of his time-travel experience and was lying unconscious in Azad Maidan. Thus, he visits Professor Deshpande to get an explanation. Upon his visit, he learns about reality being different from through our senses. Thus, the reality we live in can have many manifestations or dimensions.

So, physicists believe that there are many worlds existing other than the ones we see through our senses. Moreover, he explains that Gaitonde transitioned into another world as he was presently in a coma due to an accident. Similarly, as the last thing he was thinking about was the battle of Panipat, he went to that era only and what he saw was all in his mind.

Conclusion of The Adventure

To sum up, The Adventure summary, we learn that there are other realities too apart from the ones we sense and they may seem real but are all in the head only.