Summary of The Ailing Planet: the Green Movement’s Role

This chapter will be focusing on the causes that are responsible for the weakening health of this planet. This chapter is initially an article. The writer of this article is Nani Palkhivala. This article was published in ‘The Indian Express’ on the 23rd of November in the year 1994. In this article, the writer deliberates about the Green Movement. The ailing planet: the green movement’s role summary talks about how a zoo declared humans as “world’s most dangerous animals”. 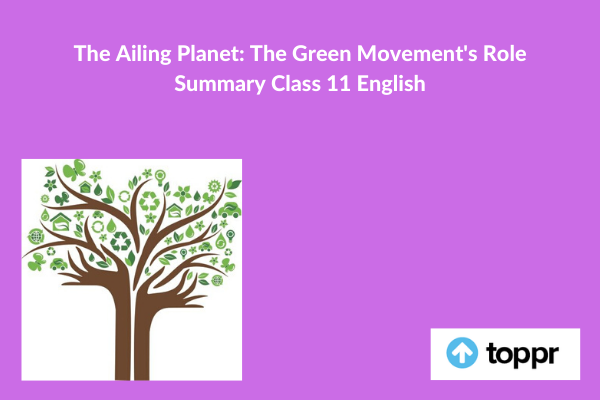 The Ailing Planet: the Green Movement’s Role Summary in English

The writer briefs the change in the perception of the societies from a materialistic view to the comprehensive and ecological view of this world. It states that humans are now worrying about the environment. In this way of perception, our planet is considered as a living organism. People consider it as it’s having its own metabolic functioning as all other living entities are having.

Then the author explains the concept of Sustainable growth of 1987. “Meets the wants of the current time, without losing the ability of upcoming generations to meet their needs and fulfil them”. Furthermore, we must utilize the natural resources in such a way that we fulfil our needs as well as conserve these resources for the upcoming generations. People consider themselves as a partner and not as a member of this planet. In actuality, we are partners with millions of creatures of this entire planet.

The Global Economic Prospect, a book, points out that the planet’s major biological systems are 4 that are fisheries, forests, croplands, and grasslands. These virtually consists of all the raw materials of industries at present. A non-sustainable utilization of these resources is occurring. Then the writer is concerned about the lessening of the forest land. The dung which we should use as a natural fertilizer, we are generally using to produce fuel. On the other hand, the soil is not receiving natural fertilizer.

Then the writer refers to Article 48A of the Constitution of India. Article 48A it states that the state should guard and improve the forest and the wildlife as well. But they do not impose the law appropriately. Then the writer refers to a Parliamentary committee report that says the decline of a forest at the frequency of 3.7 million acres every single year. The United Nations cautions that the environment has deteriorated so severely that it is critical in many of the 88 countries examined.

The population is rising at a very higher rate. Development and growth are the 2 most appropriate solutions to people’s problems. With such a population, development is a difficult task to do. We need a proper family planning to control the situation of overpopulation. There is a major need to control the population of the earth. The writer at this point once more repeats the positive change in view of the people regarding ecology. Industries must also take responsibility for a better ecosystem.

Conclusion of The Ailing Planet: the Green Movement’s Role

To conclude, the ailing planet: the green movement’s role summary, it tells us about the situation of this planet is in a crucial condition and how we must do our best to save it.