Table of content
1 Summary of Animals
1.1 Animals Summary in English
1.1.1 Conclusion of Animals

This article is about Animals summary. Walt Whitman is the poet of this poem. The poem Animals is from his work ‘Song of Myself’ in the Leaves of grass. In this poem, the poet Walt Whitman admires animals for being better than human beings. The poet wishes to live with animals and to experience a life where no one complains, and where everyone is free of sins and sorrows. The most important theme of the poem is not to admire how good animals are, but to compare humans with them in order to focus on the flaws of their nature. The poet believes that probably a very long time ago, humans possessed all the qualities such as calmness, the lack of greed and the ability to stay happy, but they have now lost them. So in this poem, Walt Whitman has given a pedagogic point before human beings. 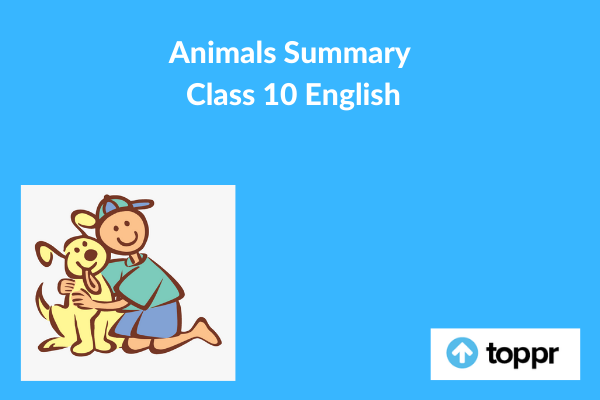 God shaped man and animals for dwelling on earth. He, God gave man to a high position than to that of animals. Walt Whitman, the great American poet, believes animals are better than men. The poet appreciated some qualities in animals which man don’t have. He expressed his observation about animals and man through his poem “Animals”.

Walt Whitman is very fond of the company of animals. The poet desires to live among the animals because according to him animals are calm and self-sufficient. They do not whine and weep about their conditions. They are always satisfied and do their duty towards God. Animals always express their love and respect for human beings. Animals spend a life of satisfaction and peace. They do not possess an obsession with possessing things. They do not show respect for others. Also, they even do not respect their thousand old descendants. Sorrow and happiness are equal to them.

Whereas humans are crazy about material things. Humans lie awake at night. They cry for the wrong that they have done. At last, they lose their temper over trifles. Animals are quite happy. They don’t idle away their time for discussing their duties to God like human beings. He observes that humans don’t have those qualities which animals possess such as signs of love, quietness, kindness, selflessness, honesty, patience, sympathy, etc. These qualities are absolutely essential for a glossy life.

The poet has a deep aspiration to learn from the animals since they express their deep concern with them. They do not possess any kind of falsehood. The poet is much amazed at their quality. He desires to earn them though he had left them carelessly. He feels that the life of a man is full of stress, depression, anxiety, unhappy. So, he desires to turn away from living with other humans. He wants to live in the company of animals for good because he thinks that he will get real happiness among animals. After all, he desires to make a relationship with animals. Thus this was the summary of the poem “Animals” written by Walt Whitman.

In the poem ‘Animals’, the poet Walt Whitman admires the animals for being better than human beings. He praises them also for possessing all such qualities that humans lack or have forgotten.