Table of content
1 Summary of Fog
1.1 Fog Summary in English
1.1.1 Conclusion of Fog

Fog Summary is the summary of a poem that reflects Carl Sandburg’s interest in nature. It beautifully captures the moment when the fog comes and moves. He presents a powerful image of life through a metaphorical cat. Its meaning is centred on the fog in the Chicago city. The poet compares the fog with the cat because the cat also comes with soft paws and without giving any sign of its arrival. The same is the case with fog, as it approaches exactly in a similar way.

The poet is saying about the fog which is generally seen during the winter season and it is coming towards the city and the harbour just like a cat. The next poet says that the fog has covered the city and harbour completely and it appears as a cat is sitting by folding its legs and looking around. Poet also described the silent and unpredictable departure of the fog. 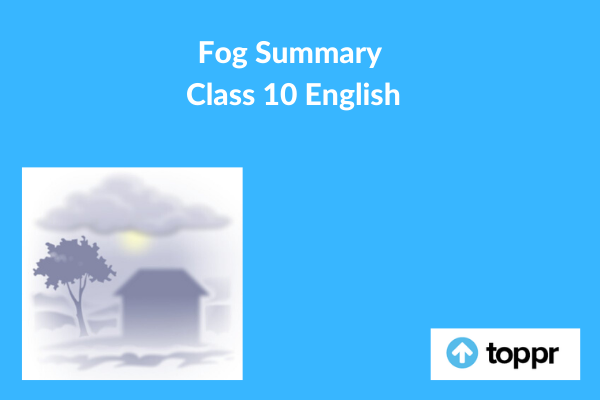 Carl Sandburg was a well-known American editor and poet. He has won three Pulitzer Prizes. Most of his poems were about the Chicago city where he lived. Among his many collections of the poem, the “Fog” is the shortest poem. But still, this poem has strong reflections about nature. This poem does have a deeper and strong meaning. The first two lines of the poem are simply describing how fog comes in.

Fogs are visible in cold areas or in mountains or forests. But in this poem, the poet describes fog which is happening in the cities and harbour. He gave a wonderful comparison between the fog and a cat. When a cat comes around us, mostly it is coming so slowly that hardly anyone is getting notice. The same is the case with the fog and its arrival. It just comes in and engulfs the entire place. It stays on for some time, creating trouble for anyone in between it, but still stays as though it is not aware of the happenings around it.

Then the poet says that it just comes, sits at the harbour and looks at the city. It is at the silent haunches and then finally moves on. Here the poet described the happening, once the fog has arrived. Fogs as such do not cause any harm, because it is very silent and the onset it is slow too. But when the fog is around, especially in the city, many accidents may occur due to low visibility. Thus due to fog people cannot see properly anything in-between them while driving on the road. Hence sometimes fog may be very harmful to human life too.

Therefore, a fog comes in similar to a small and silent kitten, and it sits and watches the beauty, while it covers the whole city.

At last, the poet is saying that as a small child gets bored playing the same game, and hence moves on to the next. Similarly, the fog does not stay in one place for a long time. Therefore, after some time the fog also moves on. Fog does not stay longer at any one place.

This very small poem is describing nature’s act in a beautiful manner.