Summary of Madam rides the bus

This article focuses on Madam rides the bus summary. In this story, the author is trying to present the world as seen from a child’s perspective. The main character of this story is an eight-year-old girl Valli who lives near a bus stop in a village. Valli develops a desire to enjoy a ride on the bus. For this purpose, she needs to reduce her expenses so that she can save enough money for the two-way fair.  While on her journey, Valli does not want anybody’s help and wants to feel independent. She enjoys every bit of her journey to the town. But she is careful enough not to get off the bus in the unknown localities. On her return journey, a sad accident spoils her mood but she just keeps it to herself. Thus she wants to explore more and wishes to go for another ride in the future. 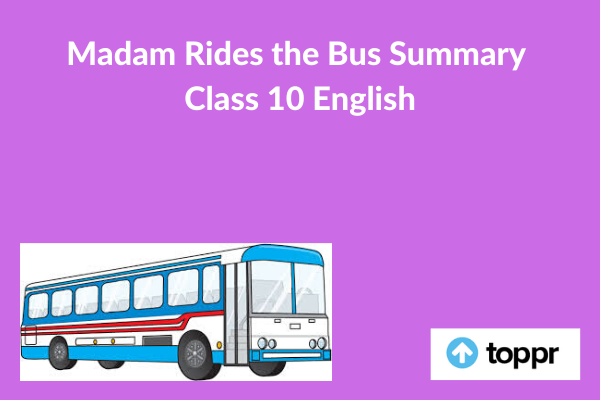 This is a sensitive story of a Tamil girl Valliammai or Valli who is only eight years old. She was curious to know about the outside world. Also, she did not have friends to play. So she keeps standing inside the doorway of her residence and watch people in the street. This was her favourite pastime. However, she was always mesmerized by the bus journey. There travelled a bus between her village and the closest city. She started collecting information about the timings of the bus from her neighbours. The bus travels to the town near her village which was approximately six miles from her village. The fare was thirty paise for one way. So, Valli started saving money for the bus fare.

She planned to travel in the afternoon when her mother was having her nap. Valli was standing on the roadside waiting for the bus. As the bus came she told the conductor she wants to go to town. The conductor was a jovial person. He called her Madam and showed her the seat. The bus was new and painted in green and white colour stripes. The bus was comfortable and seats were luxurious. On her journey, she enjoyed watching mountains, green fields, and palm trees grassland. She was experiencing it all for the first time by her own eyes. On her way to the town, she saw a young cow that came in front of the bus while crossing the road. The driver blew the whistle and the cow crossed by. All this is very fascinating for Valli. It was like a dream come true for her.

She was watching everything but the outside landscape was her prime focus. After some time the bus reached the final destination and all the passengers got down. The conductor asked her to get down but she told that she was there for the bus ride. The conductor smiled listening to her reply. Valli remained on the bus and had taken a return ticket from the conductor. The bus started and on her way back home she saw the same cow dead by the roadside. This made her heart cry. She thus became sad and tried to understand the meaning of life and death in her own terms. She came back home but did not share a word about the journey with her family.

Conclusion of Madam rides the bus

The story illustrates the desire of a small girl and how a bad incident makes her understand the matters of life and death.