In view of the coronavirus pandemic, we are making LIVE CLASSES and VIDEO CLASSES completely FREE to prevent interruption in studies
English > Footprints without Feet > A Triumph of Surgery Summary Class 10 English

Summary of A triumph of Surgery

Here we are explaining A triumph of Surgery Summary. Mr. Pumphrey was a rich and emotional lady who has a cut dog Tricky. She loved him so much that she always overfed him. Therefore, Tricki had put on a lot of weight and hence became lethargic. When Doctor Herriot saw the fat, he was shocked. Then he made a plan and told Mrs. Pumphrey that Tricki must undergo for treatment of the ailment in the hospital.

There the greedy dog had to compete with other dogs to get food, otherwise, he had to remain hungry. Soon he lost a lot of his body weight, therefore he became quite active. When Tricki was at home he was having a luxurious life. But when he came to the doctor he became all right due to the natural lifestyle. When Mrs. Pumphrey saw her active dog she thanked the doctor a lot and she felt that it was a triumph of surgery. 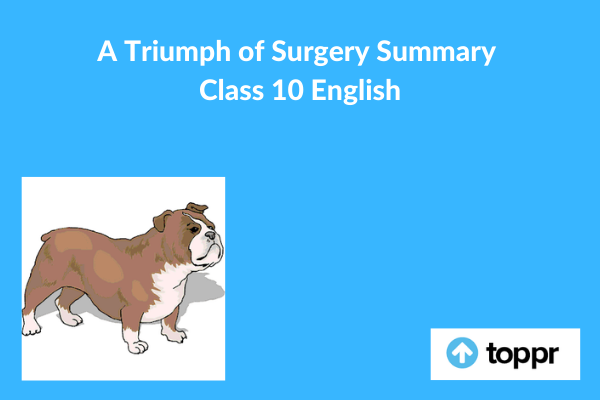 A Triumph of Surgery Summary in English

James Alfred Wight is popular as James Herriot, and He was a British veterinary surgeon and writer too. He has written this story A triumph of Surgery. The story starts when Mrs Pumphrey, a rich lady takes her dog Tricky for a walk outside. A nearby veterinary doctor saw the dog and is in a shock as the dog looks like a bloated sausage having leg at each end. Then He advised her to stop giving him diet. But Mrs Pumphrey is not able to refuse the dog. Soon Tricky fell sick and the doctor was called.

The narrator, Mr. Herriot somehow takes Tricki to his hospital for treatment, even knowing the fact that Mrs. Pumphrey will never leave the dog. He took the dog along and puts a bed for him in his surgery. For two days dog did not move much and also did not eat anything. On the third day he wanted to go outside and there he started playing with the bigger dogs. He also licked the bowls of other dogs to eat the remaining food.

His condition started improving rapidly. Also, he started fighting for his meals with other dogs. After hearing this news Mrs. Pumphrey started sending eggs to the hospital as she thought that Tricki needed energy foods after recovery. But Mr. Herriot and his partners started eating those eggs as morning breakfast.

Also, for improving Trick’s blood, Mrs. Pumphrey started sending wine in bottles. But again, Mr. Herriot consumed those. Not only this, when she started sending brandy in bottles they consumed that also. After few days Doctor took a wise decision and called up Mrs. Pumphrey as she was much worried, for taking Tricki back home. Tricki was very happy to see his mistress and jumped into the car. Then Mrs. Pumphrey said that she won’t be able to ever thank him for all this wonder. And she said that his surgery had been successful as Tricki was now cured.

Conclusion of A triumph of Surgery

The story signifies that the parents should not be indulgent which may harm their children.