Summary of Footprints without Feet

This article focuses on Footprints without feet summary. The author of the story is Herbert George Wells. This is an interesting story about a scientist named Griffin and his rare formula of invisibility. He developed a drug which made his body invisible, but he can be only felt physically. Then, he misuses his power to steal money, clothes, and food. He found it difficult to stay in London with such power so decides to move to a small village Iping. In the village, people were sceptical about him and look at him strangely. A series of incidences happened in the inn where he stayed. As his money exhausted he again started stealing it from people and hit the owners of the inn when they suspected him. But lastly, he has to reveal his identity to the people, but nobody catches him as he becomes invisible. 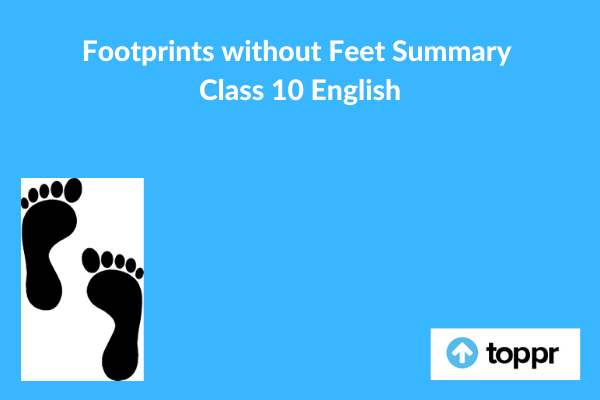 Footprints without Feet Summary in English

This is quite an interesting story about a scientist named Griffin. He had been finding ways that could make a man invisible. He got success in his experiment a developed a formula with which he can become invisible, but can be touched and felt physically. Griffin gulped the drug and became invisible. He accidentally stepped in mud and was first seen by two young men who followed his footprints till it becomes faint. He was walking on roads and was feeling cold, so he enters a shopping centre to feel warm. After the stores shut down, he chooses to wear some comfortable garments and eat something.

He initially unpacks a couple of garments and wears them. At that point from the kitchen of a café, he eats cold meat and some espresso. Later he decided to sleep on a heap of quilts in a store. The next morning before he wakes up some store associates had seen started following him. He removed all the clothes instantly and became invisible once again. Now he is wandering without clothes in chilly winters of London. He then decides to take clothes from a theatre company as he was sure he will get something there to cover his face too. He has stolen dull glasses, bogus nose, and a hat and some bandages for covering his face. Then, he goes to a shopkeeper’s place and stole all his money. Soon he realizes London is quite a busy place to live like this, so he thought of moving to the Iping village.

He booked two rooms in a hotel in the village and reached there. It is quite unusual for the villagers that an outsider with such a peculiar appearance has come to stay at a hotel throughout winter. After some time his money exhausted, and he started stealing from people. Furthermore, he hit the owner and his wife when they attempt to check his room in his absence. As they cannot see anyone the owners thought there were spirits in the inn and that unusual guest is responsible for it. At that point, the town constable is requested to inquire in regard to what his identity is and what he did to her furnishings. This made him annoy and decides to show his identity as a headless man. They cannot catch hold of Griffin as he takes off all his garments and become invisible.

Conclusion of Footprints without Feet

The story tells us the human nature of misusing their own discoveries.

Share with friends
Previous
The Ailing Planet: The Green Movement's Role Summary Class 11 English
Next
The Making of a Scientist Summary Class 10 English