In view of the coronavirus pandemic, we are making LIVE CLASSES and VIDEO CLASSES completely FREE to prevent interruption in studies
English > Footprints without Feet > The Thief’s Story Summary Class 10 English

Summary of The Thief’s Story

This article is about The Thief’s Story Summary from Class 10 English. Ruskin Bond’s ‘The Thief’s Story’ is completely more than a thief’s story. The story focuses on basic human values and relationships. It is easier for a thief to burgle a greedy man. It is difficult even for a thief to burgle a careless and honest person. A young boy becomes friends with Anil. Anil trusts him totally and employs him. Does the boy deceive his trust? The story is about a fifteen-years-old thief. He used to change his name every month to stay ahead of the police and old employers. This time he called himself Hari Singh. The other person Anil in the story is a 25-year-old writer. The thief one day meets Anil and asks that if he can work for him. The story discloses how the thief deceives Anil by committing theft but withdraws later on. 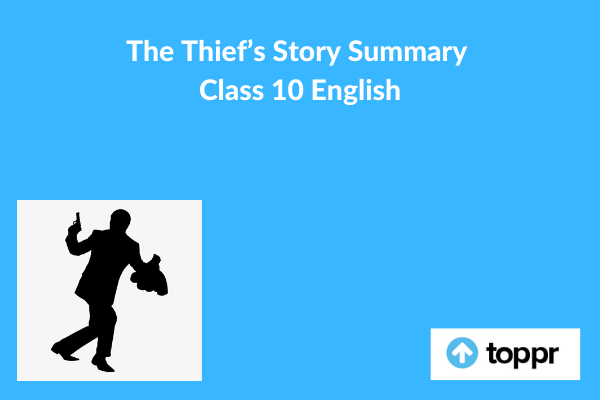 The Thief’s Story Summary in English

Anil was 25 years old writer. He was living his life very carelessly. He was struggling to write for earning the money to run his life. One day Anil was watching the wrestling match. He mates Hari.  Hari used his old formula to flatter the person. Anil impressed and promised him that he would teach him how to write, add numbers and how to cook tasty food. Now both were living together happily.

One day Hari saw that Anil had brought a bundle of notes. He saw him keep them under the mattress. As Hari saw the bundle of notes, so his evil spirit aroused in his mind. He decided to rob Anil that night. After taking dinner Anil slept calmly. Hari crept to the bed and slipped his hand under the mattress. He got the notes and ran away from there. He left for the railway station to board a train to Lucknow. But, he missed it. He wandered through the bazaars. It was raining and Hari Singh was completely wet.

There was a conflict in his mind. He did not want to betray the faith of Anil. Moreover, Anil was teaching him how to write and add numbers that could transform his life. So he left the railway station. He came to the field and sat on the bench. Just then heavy rain was going on. A chill wind was blowing. He felt guiltier as he had cheated an innocent person. His shirt and pyjamas wedged to his body because it was wet due to the rain.

Hari Singh had a change of heart. He decided to return to Anil and keep the money under the pillow. He reached the room and placed the money back. The next morning, he woke up a bit late and Anil had already made his tea. Anil offered Hari Singh Rs. 50 saying he had earned it. He told him he would now be paid regularly. Hari kept the note in his hand. He realized that the note was still wet from the rain last night. Hari got to know that Anil had come to know about his misdeed but there was no sadness, anger or guilt in his mind.

Conclusion of The Thief’s Story

The moral of the story is the human values and relations are important in life and such values can change a person too.