There are many historical structures in Delhi. Red Fort is one of them. It is renowned all over the world. It is a sign of Mughal power and majesty. The Emperor Shah Jahan built Red fort in 1648. It is built of red stone. It is located on the west bank of the river Yamuna opposite the famous Chandni Chowk market. 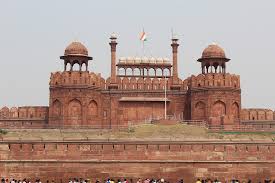 Significance of The Red Fort

Everyone knows Red Fort as one of the several wonders in India. Though it has witnessed many centuries that has a treasured history of our country, Red Fort stands young always.  Every year on 15th August, that is our independence day the Prime Minister of India addresses its country about its virtue and purpose of life.

It is one of the greatest and most significant historical formations in India. Thus, we can say that this monument embraces together the walls that have witnessed the Mughal dynasty, imprisoned India during British empowerment to now a democracy.

This monument embraces the utmost significance in Modern Indian History. It is made of Red Sandstone alone. Sited in central Delhi it was placed where the Mughal emperors lived for many periods. Red Fort was a magnificent castle coated with precious jewels but the Britishers looted these precious jewels during their empowerment over India.

Since Delhi was the capital of India until the British men shifted it, Red Fort was the control place for the whole nation. Built on the banks of Yamuna River, the walls of this magnificence fort have been built from 30 meters high Sandstone. It is supposed that Red Fort was made after 9 years of hard work of numerous masons for day and night during all seasons.

The architecture of Red Fort is amazing and appreciable for its creations of five centuries ago without any modern-day technologies and methodologies. It is built with typical Mughal art and view. It has a Dewan-e-Am which is courtroom for all. The king held a hearing from common men about their complaints.

The Red Fort is built right beside the Fort of Islam Shah Suri, namely- Shalimar Fort. He built it in 1546 as his fortified Palace. Both the forts are combined together by a water channel, namely- Stream of Paradise, or Nahr-i-Behisht.

Prominent Structures within the Fort

Though as many as 66% of the buildings within the fort were either broken or badly damaged, the Red Fort still houses many historic structures and some prominent ones are listed below:

Red Fort is not only a building but a true witness of the national movement of Indian freedom. Thus, it is a symbol of the great and golden history of India. So the Indian republic, as well as every citizen of India, have great affection and respect towards the Red fort. Undoubtedly it will always be a symbol of great Indian history. Also, it holds a special place in Indian history because Jawaharlal Nehru announced the independence of India from Red Fort.