Have you ever wondered what the earth looks like from the space? Is it flat or round as it looks? Do you think the moon and the wishing star that you loved watching as a kid, have no light of its own? In this chapter, we will learn some interesting facts about the space and the various celestial objects.

Well, you would feel that the earth is flat, but it is actually round! A lot of scientists have been into space and taken images for the same. Then, why don’t we fall off the edge? Why does the wishing star we see seem like it falls on the ground? The answer to this is simple. It is due to the earth’s gravitational force. Earth attracts everything towards its centre. That is why we do not fall off.

Up and Down On The Earth

Do you think the people in Argentina stand upside down? And the star they see on the ground? NO! They are also standing just like you do and see the star up in the sky just like us! Up and down are just relative with respect to the shape of the earth and space.

The Effect of the Gravitational Pull

It is the gravitational force that keeps everything on the ground. We are all attracted towards the ground because of this force. In the space, there is no gravitational pull. 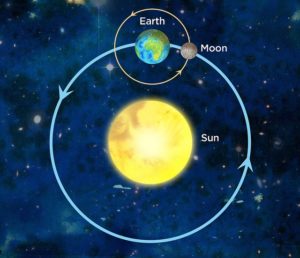 Can You Think Why Was Sunita’s Hair Standing?

This gravitational force is also the reason why water flows downwards on any slope or on mountains. Scientist Newton discovered gravitational pull when he was busy thinking and making a wish from the wishing star when an apple fell from a tree over him! He imagined why the apple would fell down instead of moving up. This led to the discovery of gravitational pull.

Q1. Give the date wise description of Sunita’s activities in the spacecraft.

Ans: The date-wise description of Sunita’s activities in the spacecraft are:

Q2. Do you find anything similar between the globe and a picture of the earth? In what way are they different?

Ans: The similarity in both the cases is that the land and the sea areas can be distinguished. However, the entire land area is divided into various countries on the globe which is not so in case of a picture of the earth.

Q3. Do you think Sunita could make out Pakistan, Nepal, and Burma separately when she saw the earth from space?

Ans: No. That is not possible. Sunita could not have been able to do so.