Resources are essential and valuable to us and gift of nature that help us to fulfill our daily needs.  These are naturally occurring materials which we use and modify the way that is beneficial to us. Over the years, because of modernization, industrialization, overpopulation etc have increased the exploitation of natural resources.

Overpopulation is one of the biggest concern we face.Increasing population has affected natural resources.  The man has to depend on natural recourses for all his need for food, clothing shelter etc. Residential houses, buildings for industrial use are being built on a large scale. The overpopulation and the ever-increasing demand for things for physical amenities have resulted in the fast exploitation of natural resources.

Human is exploiting non-renewable and renewable resources at a very fast speed. Due to the rapid increase in population, most of the natural resources are being rapidly consumed. This rate of consumption has disturbed our environment or ecosystem

Browse more Topics under What If It Finishes 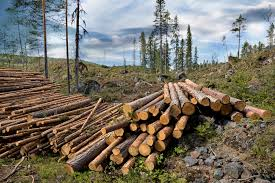 Minerals are valuable resources as they satisfy many of our daily needs. To take out minerals from deep inside the earth is known as mining. The extraction and mining of these natural resources lead to some negative effects on the environment. Mining leads to the degradation of soil quality, fertility.

Underground water also contaminated due to mining. It leads to the degradation of soil quality and fertility. Carbon dioxide increases because of mining activities and gives birth to greenhouse effect acidic rain, global warming which causes climatic change.

The modern technology and industrial development have been the main cause of resources depletion. The grand industrial developments, the green revolution, the transportation expansion, the rapid growth of cities and accidental management of natural resources have badly affected environment balance. The use of chemical fertilizers and manures and burning of field waste pollute the atmosphere.

Soil erosion means blowing away from the top layer of soil by wind and water. It reduces the fertility of the soil. Erosion occurs when the soil becomes loose because of lack of plants and grasses growing on it. This is one of the most dangerous effects of excessive cutting of tree for human use.

Mixing of harmful substances with soil, air, and water is pollution. Unwanted change in the physical, chemical and biological characteristics of air, water, and soil is pollution. Exhaust gases from vehicles, smoke from chimneys, garbage dumps and release of factory waste into rivers and oceans are examples of pollution.

Ans Global warming which is the increase in the earth’s temperature due to greenhouse gases like carbon dioxide.

What if it Finishes?

What if it Finishes?