In view of the coronavirus pandemic, we are making LIVE CLASSES and VIDEO CLASSES completely FREE to prevent interruption in studies
English > Footprints without Feet > Bholi Summary Class 10 English

In this article, you will be reading about Bholi summary. Bholi is a work by Khwaja Ahmad Abbas (K.A. Abbas). He was an Indian film director, screenwriter, novelist and journalist. He did his works in Hindi, Urdu and English languages. This story is about a girl, Bholi, who had fallen off a cot in the head. Thus, some part of her brain was damaged and she remained a backward child. She stammered and also had pock-marks on the face. Everyone made fun of her. However, her life changed when she started going to school. A kind-hearted teacher encouraged her and she overcame her problem of stammering.

Moreover, when she was asked to marry in exchange for dowry, she refused. She said that she would not marry a greedy person. On the contrary, she will serve her parents in their old age and teach in the same school where she learnt so many good things. 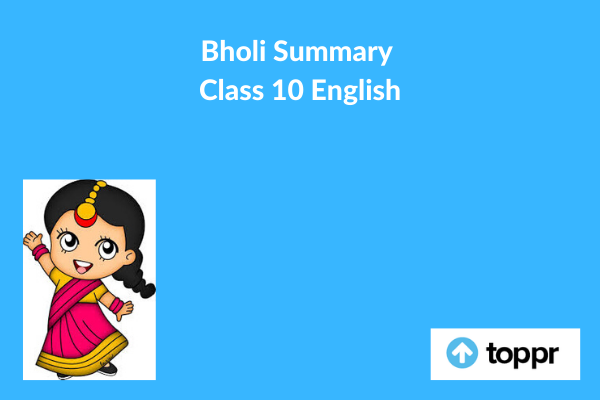 This story is about a girl, Bholi, whose real name was Sulekha. She suffered from some brain-damage and thus used to stammer. Moreover, she suffered from the disease of small-pox which left pock-marks on her face. This made her look ugly. Thus, due to her dullness and ugly face, people made fun of her. Also, people called her Bholi as she remained a backward child. Ramlal had seven children- three sons and four daughters. Bholi was the youngest of all daughters. All others were healthy and strong except Bholi. They would also worry about her marriage. One day, Tehsildar Sahib came to perform the opening ceremony of a primary school opened in the village. He asked Ramlal to send her daughter to school. However, Bholi’s mother was not in support of sending her school. Yet, she agreed.

At first, Bholi was frightened to hear about school. However, when she was properly cared for, given good clothes and other things, she began to believe that she was being taken to a better place than her home. She was happy to see girls of her age. She wanted to make one of them her friends. However, when the teacher asked her name, she stammered and all the girls laughed. This discouraged her badly. She started crying. But the teacher was a kind-hearted woman. She encouraged her to speak. Moreover, she told her that she could overcome her stammering completely if she came to school daily. This aroused a sign of hope and new life in Bholi.

Years passed, the village became a small town. Moreover, the little primary school turned into a high school. Other improvements have also taken place. A marriage proposal came for Bholi. It was from a lame old man whose children were also grown up. However, Ramlal and his wife agreed as he was well-settled. Bholi’s sisters were envious to see the pomp and splendour at their sister’s wedding. However, when the groom was about to garland the bride, a woman slipped the veil from the bride’s face. Bisambar refused to marry such an ugly girl without a dowry. Ramlal managed the amount.

However, Bholi refused to marry such a greedy person. People were startled to see her speaking without stammering. The groom returned back. Bholi told her father that she would serve him and mother in their old age. Furthermore, she will teach in the same school from where she learnt so many good things.

We learnt from the story that proper support and emotional security can lead to a child’s development.