Downward sloping of demand curve-The demand of a product refers to the desire of acquiring it by the consumer but backed by his purchasing power and willingness to pay the price. The law of demand states that there is an inverse proportional relationship between price and demand of a commodity. When the price of commodity increases, its demand decreases.

Similarly, when the price of a commodity decreases its demand increases. The law of demand assumes that the other factors affecting the demand of a commodity remain the same.

There may be various reasons for the falling nature or downward sloping of demand curve. Some of them are as follows: 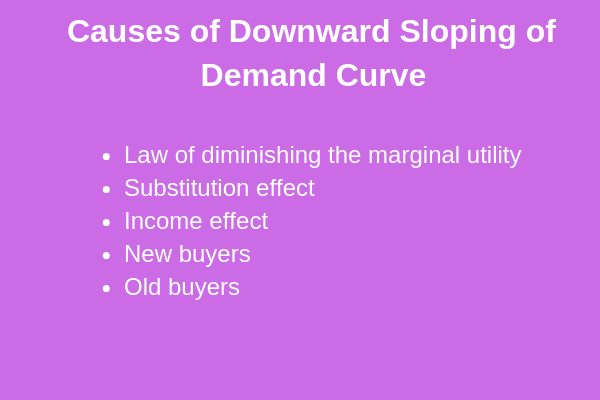 1. Law of diminishing the marginal utility

For example, when a person is very hungry the first chapatti that he eats will give him the most satisfaction. As he will consume more chapattis, his level of satisfaction will diminish.

Thus, when the quantity of goods is more, the marginal utility of the commodity is less. Thus, the consumer is not willing to pay more price for the commodity and its demand will decline.

Also, when the price of the commodity is low, its demand increases.

Hence, the demand curve slopes downwards from left to right.

Let us understand this with an example. Tea and coffee are substitute goods. If the price of tea rises, consumers will shift to coffee.

Similarly, when the price level rises, the purchasing power of the consumer’s decreases and they buy less quantity of goods.

Learn more about the  Law of Demand here in detail.

Due to the fall in the prices of a commodity new buyers get attracted towards it and buy it. Thus, this increases the demand for the commodity.

When the prices of the goods fall the old buyers tend to buy more goods than usual thereby increasing its demand. This causes the downward sloping of demand curve.

How does a change in the income of the consumer affects the demand for goods?

When the income of the consumer’s increases they purchase more goods and vice-versa. Thus, income and demand have a directly proportional relationship. This implies that the demand curve slopes upward from left to right. This holds true in case of superior or normal goods only.

However, this is not the case of inferior goods. Inferior goods are goods of low quality. Thus, when the income of the consumer increases he will refrain from buying the inferior goods and shift to buying superior or normal goods. So, the demand curve will slope downwards from left to right.