India is a large country and that is why it is impossible for one minister to have the entire control of it. Thus, different ministries are formed in India. And each of these ministries has their own portfolio. The cabinet minister is then the head of that department and their decision is considered the final. Below is the list of the ministers and portfolio.

The union minister will not interfere in the matter of the railway or coal department. So, it is necessary that cabinet ministers have their own unique portfolio.

These portfolios contain the various departments in the government. So, one cabinet minister can have more than one department in their portfolio. 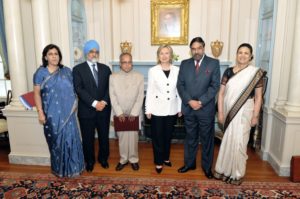 Whenever the election takes place in India either a party is selected. If it has the majority, then it can form its own government or else it has to form a coalition government.

Once the government is formed, the party selects a certain group of ministers which are handled with certain departments.

Learn more about Constituency and Ministry of Cabinet Ministers here in detail.

Q. Which minister in India is in charge of the Human resource department?

Q. Which minister in India currently looks after the defense and related things?

Q. Who is in charge of Health and family welfare portfolio in India?