The world we live in is vast and diverse beyond our imagination. And Mother Earth has blessed us with resources that we would be lost without. What’s interesting about this beautiful planet is its constantly evolving nature. And it is our responsibility to study, explore, and preserve the dynamic environment that we live in. And geography helps us do just that.

Next, regional geography deals with the natural environment of a specific area or region and Cartography is the study of maps. Finally, integrated geography studies the spatial interactions between humans and their environment. Now that you are familiar with the concept of geography, let us look at a few basic geographical facts of our country.

Browse more Topics under Static Geography Of India And World

India has a varied landscape. From the snow-clad Himalayas to rich, vibrant coastlines, we probably have all the physiographic features of an environment. However, before we get into that, let us first understand India’s location on the world map. India is a part of the Asian continent and lies on the Indian Plate.

India has a total area of 3,287,263 square kilometres and that makes it the seventh largest country in the world. The Himalayan range defines the north of India and the Arabian Sea, the Bay of Bengal, and the Indian Ocean define the southern part. India shares its borders with China, Bhutan, Nepal, Sri Lanka, Pakistan, Bangladesh, and Myanmar (Burma). 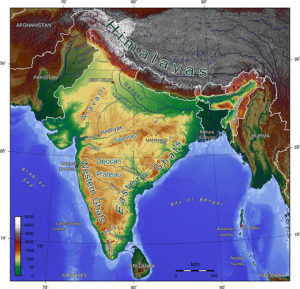 Next, let’s discuss the various physiographic regions of India. These include the northern mountains, the peninsular plateau, the Indo-Gangetic plain, the Thar Desert, the coastal plains, and the Islands.

The Himalayan range in north India is the world’s highest mountain range. Within India, they extend from Jammu and Kashmir in the north up to Arunachal Pradesh in the east. Kanchenjunga is the highest peak in India that lies on the Sikkim-Nepal border. The Himalayas consist of the Karakoram, Zanskar, and the Pir Panjal ranges. 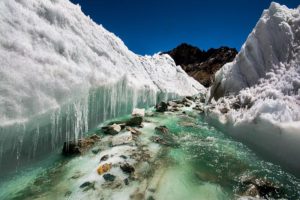 The peninsular plateau in India consists of the Vindhyas, Aravalli, Satpura, Eastern Ghats, and the Sahyadri ranges. The Vindhyas range runs across central India and separates north and south India. The Satpura range begins along eastern Gujarat near the Arabian Sea and runs east across Maharashtra, Chhattisgarh, and Madhya Pradesh.

The Aravalli range starts from Rajasthan and runs northeast to southwest direction. The Western Ghats or the Sahyadri range runs along the western edge of the Deccan plateau. Finally, the Eastern Ghats start from West Bengal and run haphazardly across Odisha, Andhra Pradesh, and Tamil Nadu. The Nilgiris lie at the junction of the Eastern and Western Ghats.

ition to the smaller mountain ranges, the peninsular plateau consists of the Malwar, Chota Nagpur, and the Deccan plateau.

The Indo-Gangetic plains run parallel to the Himalayan range. These plains start from Jammu and Kashmir and run all the way across to Assam. The major rivers in this region are the Ganges, Indus, and Brahmaputra.

And these rivers make the soil along these plains most suitable for agriculture, which makes this area one of the most populated areas in the world. The Indo-Gangetic plains consist of four divisions—Bhabhar, Tarai, Bangar, and Khadar.

The Thar Desert lies in Rajasthan and makes up for 61% of its total geographic area. A part of this desert lies in the Aravalli range. Another part extends up to the Rann of Kutch along Gujarat’s coastline. The high wind erosion in this area causes huge shifting sand dunes, which cover most of the desert. 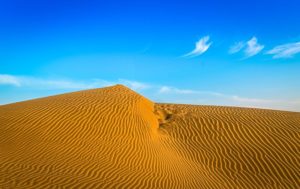 The Western Coastal Plain starts from Gujarat and extends along the coastlines of Maharashtra, Goa, Karnataka, and Kerala. This coastline includes the Konkan and the Malabar Coast.

India has two major island formations that include the Lakshadweep and the Andaman and Nicobar Islands. The Lakshadweep Islands lie in the Arabian Sea off the coast of Kerala.

Physical Geography of the World

Now that you are familiar with the landscape of India, let’s look at the world’s landscape. Our world consists of seven continents—Asia, Africa, Antartica, Australia, Europe, North America, and South America. 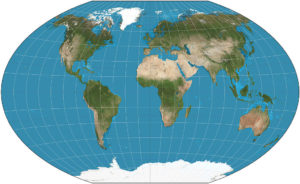 Let’s begin with Asia, which is the largest continent. And almost two-thirds of the world’s population lives in Asia. Asia is home to the highest mountain range. In addition, it includes a part of the Arctic Circle.

Major geographical highlights include the huge Indus, Ganges, Hwang Ho, and the Yangtze rivers; the Himalayan range and the Ural and Pamir mountains; The Gobi and Thar Deserts; the Indian Ocean; and Mount Fuji, an extinct volcano.

Moving on to Africa, it is the second largest continent. The Atlantic Ocean completely encircles Africa. Africa’s geographical area consists largely of deserts including the huge Sahara Desert and the Kalahari Desert. The Savannahs consist of grasslands and support agriculture and livestock.

Central and West Africa are home to tropical rainforests and Northwest Africa is home to the Atlas Mountains. The major rivers in Africa include the Nile, Congo, and the Zambezi rivers.

Next, North America is the third largest continent and it lies in the western hemisphere. The Atlantic, Arctic, and the Pacific oceans flank this continent. The United States of America and Canada are the major countries of North America. This continent is home to the huge Rocky Mountains and Appalachian Mountains.

The St. Lawrence River separates East Canada from the US and the Mississippi River runs across almost all of the United States. Major rivers include the Great Superior, Lake Michigan, Lake Huron, Lake Erie, and Lake Ontario, which form the biggest fresh-water systems. The Panama Canal, located in Central America, connects the Atlantic and the Pacific Oceans.

The Amazon Rainforests are the biggest rainforests in the world and they occupy most of western part. The Amazon River is the second largest river in the world. The countries of Brazil and Venezuela are home to tropical grasslands.

Next, Europe is the second smallest continent and shares the same land mass as of Asia. The United Kingdom, Ireland, and Iceland are the major Island countries of this continent. The Arctic and Atlantic oceans surround Europe and the Mediterranean Sea separates Europe from Africa.

Moving on, Australia is the smallest continent in the world and lies in the southern hemisphere. The Indian and Pacific oceans surround Australia. As an island continent, Australia’s vast coastlines defines its boundaries.

Deserts form around 20% of Australia’s landscape. Australia’s geography is very diverse ranging from snow-capped Australian Alps to deserts to dense forests. The major geographical highlights of Australia include the Alps and the Great Barrier Reef.

Finally, Antartica is the fifth largest continent and occupies most of the South Pole. The Indian, Pacific, and Atlantic oceans surround Antartica. This continent is the coldest, driest, and windiest continent. Almost 98% of Antartica is covered with ice all year long, which makes it uninhabitable for human settlements.

Question: Which among the following will constitute the criteria for defining a taxon as critically endangered?

Select the correct answer using the codes given below.

Solution: Option D – All of these

Share with friends
Previous
Equilibrium, Excess Demand and Supply
Next
Every Drop Counts

Static Geography of India and World

Static Geography of India and World