Imagine that you are walking on a beach, and you feel the sand beneath you. You feel the cool ocean breeze on your face as well as the water of the waves crashing on your feet. the sand is Lithosphere the water is Hydrosphere and the cool breeze that you feel is the Atmosphere. To summarize the major domains are Lithosphere, Hydrosphere, Atmosphere and Biosphere. Let us study them.

Table of content
1 Suggested Videos
2 Lithosphere
2.1 Continents of the Earth
3 Hydrosphere
3.1 About the Oceans
4 Atmosphere
5 Biosphere: The Supporter of Life Forms
6 Solved Question for You 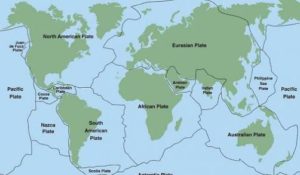 The lithosphere is a domain concerning land. When land is measured, it is measured by taking sea level as it’s base. The height of the land is also measured by denoting it as either ASL (Above Sea Level) or BSL (Below Sea Level).

For example, Mount Everest, the highest mountain on Earth is 8848 meters above the sea level and this is denoted as ASL (Above Sea Level) while Mariana Trench, deepest part on Earth is 11,022 meters BSL (Below Sea Level). These two constitute the two extremes of Lithosphere. When discussing Lithosphere we must understand the extent of the Continents.

Continents of the Earth 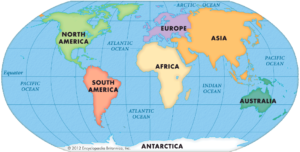 The Earth is divided into 7 continents. Asia, Europe, Africa, North America, South America, Antarctica, and Australia. Continents are the most important domain as they inhibit the largest number of lifeforms.

Hydrosphere is a domain that contains water or water bodies. If we take the earth into consideration. Only 1/4th (29%) of the earth is covered in soil/land while the rest 3/4th (71%) portion is covered in water. 97% of the earth’s water is found in oceans and is not suitable for use as it is saltwater. 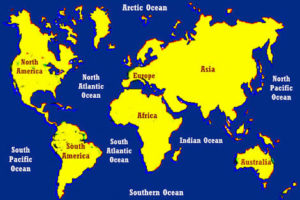 Oceans cover a large part of the globe. There are four primary oceans on Earth, which are Pacific Ocean, Atlantic Ocean, Indian Ocean and the Arctic Ocean.

The Arctic is a polar region located in the northernmost part of Earth. It connects to the Pacific Ocean through a Strait known as Bering Strait that passes through Russia and America. The ‘S’ shaped region between Europe, America, and Africa is the Atlantic Ocean. The Atmosphere is a domain that consists of layers which are the troposphere, stratosphere, mesosphere, thermosphere as well as the exosphere. Lifeform sustains on troposphere which is the first layer of the atmosphere. The density of Atmosphere is maximum at sea level and decreases with increasing height. The atmosphere consists of 78% Nitrogen, 21% oxygen and other gases like Argon, Carbon dioxide as well as some other gases comprise  1% of the volume.

Biosphere: The Supporter of Life Forms 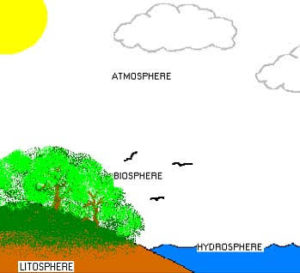 It is in this zone that life, that is unique to Earth exists and flourishes. The biosphere is divided into two kingdoms, Plant kingdom, and the Animal kingdom. Deforestation and pollution are rapidly damaging the Biosphere.

Learn about Some Major Landforms of the Earth here in detail.

Ques: What are Straits and Isthmus?

Ans: Isthmus is an area of land or passage that connects two major continents and Strait is a narrow passage of water connecting two large water bodies. Examples are The Panama Trench and The Palk Strait.

Major Domains of the Earth

are you really the best teacher or is a scam

This domain of the Earth is associated with land

Major Domains of the Earth