Once, a few centuries ago, dense forest covered a majority of our country. But as we began development, these forests made way for cultivation and infrastructure. This indiscriminate cutting down of trees is what we call deforestation. Let us take a look at the causes of deforestation in India since the colonial times.

Table of content
1 Suggested Videos
2 Causes of Deforestation
2.1 1] Land to be Improved
2.2 2] Sleepers on the Tracks
2.3 3] Plantations
3 The Rise of Commercial Forestry
4 Solved Question for You

Forests form an important part of our ecosystem and are beneficial to us in various ways. Major deforestation in India occurred during the British rule, between the years 1880 and 1920. Deforestation is not something that has come up recently but the problem had begun centuries ago. However, it was under the colonial rule that the whole problem of deforestation became more systematic and extensive. 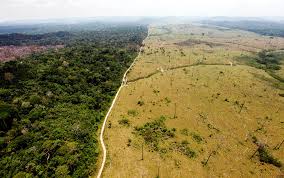 1] Land to be Improved

2] Sleepers on the Tracks

The large areas of natural forests were cleared up to meet Europe’s growing need for these commodities. The vast areas were given to European planters at cheap rates and also the colonial government took over the forests.

The Rise of Commercial Forestry

In India, the colonial rulers required huge supplies of wood for the purpose of railways and ship which lead to widespread deforestation and the British government got alarmed. A German expert on forests, Dietrich Brandis was appointed as the First Inspector General of Forests in India. He emphasized that rules that needed to be framed about the use of forest and had also introduced a system where people would learn to manage the forests with his initiatives –

Q: What percent of the world’s total area cleared between 1700 and 1995 for industrial uses, cultivation, pastures, and fuelwood?

Sol: The correct option is “B”. Diversity in forests is disappearing quickly. The process of deforestation began many centuries ago. It became more systematic and extensive during the colonial period and has continued in the same fashion sense.