We eat food every day. Bread, roti, vegetables, dal, fruits, etc. But, have you ever thought how did humans discover food? Which fruits and vegetables could we eat and which ones were poisonous? Do you know that before we started growing food, humans used to gather edible products from nature? Let’s take a look at history to understand how we evolved from gathering to growing food.

Around 10,000 years ago, the New Stone Age had started. This was also known as the period of great development for the human race. It was during this period that humans moved from gathering to growing food and breed and herd animals.

Table of content
1 Suggested Videos
2 How did Farming and Herding Start?
3 From Gathering to Growing Food – A New Way of Life
4 Archaeological findings
5 Mehrgarh
6 Daojali Hading
7 Solved Questions for You

How did Farming and Herding Start? 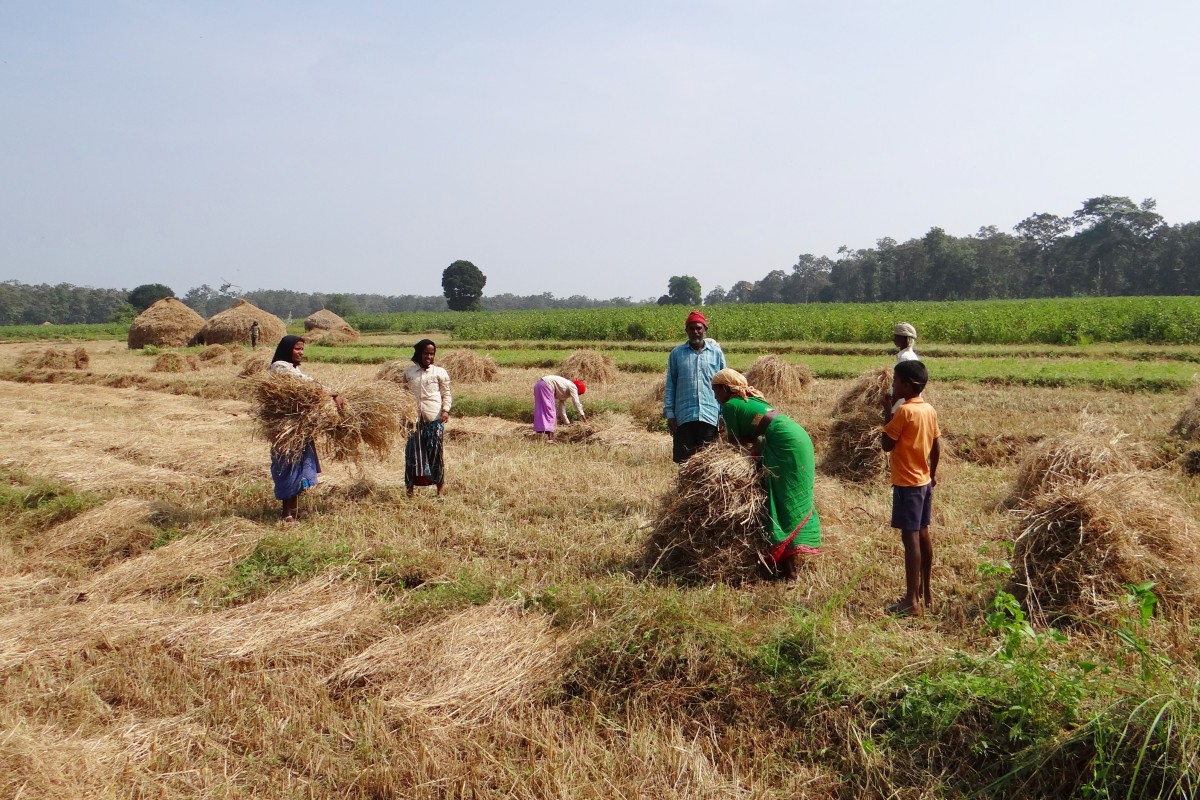 Around 12,000 years ago, the world had started becoming warmer. This led to an increase in plants, trees, grasslands and overall greenery. Because of this, animals which survived on grass like deer, goat, sheep, etc. started increasing in number.

Humans were still gatherers – they would gather the food that they could eat. As the greenery increased, people started observing the places where edible plants could be found, how seeds broke off stalks, fell on the ground, and new plants sprouted from them.

While it is not possible to find out exactly how we started farming, most people believe that this gradual process allowed humans to start planting the seeds they wanted and growing them for food. This was the beginning of farming.

Slowly, animals started coming to the places where humans grew crops to eat the grass. People started allowing animals that were not aggressive to come and stay near them like sheep, goat, etc. because these animals would provide milk, meat and some would even carry a load.

Wild animals would attack these animals for food. However, humans started protecting them from these attacks and soon became herders. Interesting fact: The first animal to be tamed by man was a dog.

From Gathering to Growing Food – A New Way of Life

As humans started farming, they realized that seeds took some time to grow – days, weeks, months and even years. This meant that people had to stay in one place for a long time taking care of the plants, watering them and protecting them from birds and animals. This had to be done till the grain ripened. After that, the grain had to be stored carefully for future use as food and seed. Slowly, people started making clay pots or woven baskets and some even started digging pits in the ground for storage.

On the other hand, animals needed some careful caretaking too. Since they provided people with milk and meat, they worked as a store of food when needed. Overall, this change led to people settling down in one place for longer times. As the man went from gathering to growing food, he began to put down roots.

Take a look at this map: 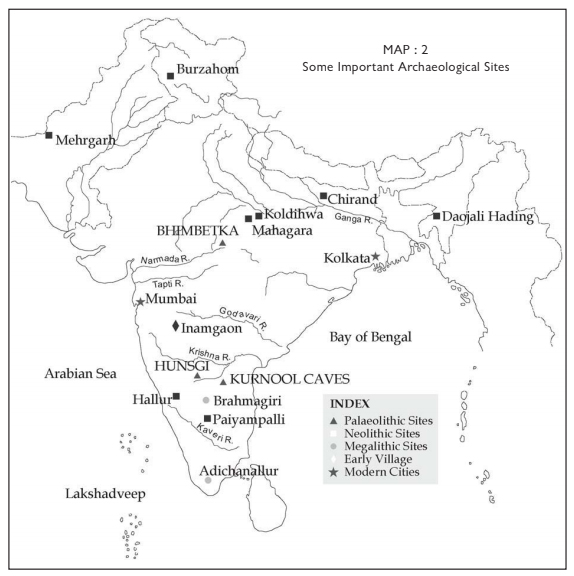 The squares on the map are the places where archaeologists have found evidence of early farmers and herders. Grain and bones were also found across the subcontinent across these places. It was evidence of a time when the man went from gathering to growing food. Here is a quick look at where evidence of grains and bones were found:

In Burzahom, archaeologists also found pit-houses built in the ground with steps leading into them along with some cooking tools inside and outside the houses. Many tools were also found which included those which had a polished edge to help in cutting along with mortars and pestles to help in grinding. In some places, earthen pots were found which were used for storage and cooking as well.

Let’s take a closer look at two sites from the map above: Mehrgarh and Daojali Hading:

In the subcontinent, the earliest known civilization was in Mehrgarh (now in Pakistan). This was near the Bolan Pass – an important part of the route to Iran. In their excavations, archaeologists have found many burned grains and bones of animals. Other excavations revealed remains of square or rectangular houses with four or more compartments – an ideal design for storage. Some burial sites were also found.

These excavations led them to conclude that Mehrgarh was one of the earliest villages known to us. Mehrgarh was possibly one of the first places where humans started growing wheat and barley and rearing animals. Also, the burial sites highlight the fact that people also believed in some form of life after death since burial is an arrangement of taking care of the dead.

On the hills near the Brahmaputra valley and close to the routes leading into China and Myanmar (Burma), is Daojali Hading (in Assam). In their excavations in this location, archaeologists stone tools like mortar and pestle. This was an indication of the possibility of people growing and preparing food for consumption. Apart from these, some tools made of fossil wood (wood that hardened into stone) and pottery were found along with Jadeite – a stone that was possibly brought from China.

Q: Which of the following occupations are followed by members of the tribe?

Answer: The correct option is “D”. Members of a tribe follow occupations such as farming, hunting, gathering, herding, and fishing. Usually, women do all of the agricultural work like sowing, reaping, harvesting etc.

Q2. Which is the earliest known village to us?

From Gathering to Growing Food

From Gathering to Growing Food