This independent regional empire has played a major role in History. The leading power in Southeast Asia with extensive trade networks has a rich cultural heritage. The literature of Bengal is known for its rich compositions and epics. Let us know about the emergence of Bengal, it’s language and literature.

The fourth-third centuries BC resulted in the development of commercial ties between Bengal and Magadha (south Bihar). Since Sanskrit was the predominant language spoken in Magadh, these ties resulted in a strong influence of Sanskrit over the local languages spoken there.

The Gupta rulers established political control over north Bengal thus resulting in a strong cultural influence of the mid-Ganga valley. As observed by the Chinese traveller Xuan Zang that the 7th century witnessed the widespread use of languages related to Sanskrit in Bengal. From the Eight century under the Pala rule, Bengal became the centre of a regional kingdom.

During the period between the fourteenth and the sixteenth century, the Sultans began to rule Bengal. Subsequently, Akbar conquered it in 1586, which led to the use of Persian as an administrative language. While Persian still remained the official language Bengali became the regional language.

Bengali – The Language of Bengal

The end of the 15th century witnessed the union of the group of  Bengali dialects resulting in the formation of a common literary language which was initially the spoken language of the region towards the western part of Bengal, now known as West Bengal. Though Sanskrit was the base from which Bengali developed, it has evolved a lot. Thus the modern-day Bengali is a blend of some Sanskrit as well as many non-Sanskrit words. These words have their source of origin in the tribal languages of Persian as well as Europe.

The Rich Literature of Bengal

For the study of early Bengali literature, it is imperative to study it under two heads:

The Literature Influenced by Sanskrit 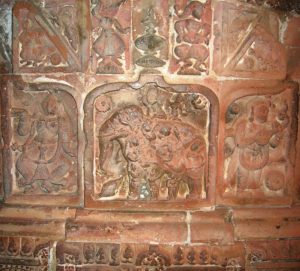 (Source: Wikipedia) Nabanarikunjara, one of the themes of Mediaeval Vaishnava lyrics, engraved on a temple pillar at Bishnupur, Bankaru.

Sanskrit epics, such as the Mangalakavyas as well as the Bhakti literature which included the biographies of Chaitanyadeva who spearheaded the Vaishnava Bhakti movement were translated into Bengali. These were indicated to be dating to later half of the 15th as well as mid 18th centuries.

Apart from the transliteration of Sanskrit epics, Bengali literature is rich many folk tales, fairy tales, stories concerning the worship of Dharma Thakur. These enjoyed particular popularity in the eastern parts of Bengal and were mainly circulated orally and thus it is difficult to date them precisely.

The Nath cult or yoga-sadhana serves as the basis of this Medieval branch of Bangala literature. Adinath, popularly known as the great Lord Shiva is the main God of the Nath cult. The Nath literature was mainly divided into two types, didactic and narrative. Didactic literature was peculiar in the sense the doha, prahelika as well as chara used, were rich in the use of code words and sentences. The dohas are included in collections such as Goraksa-Sanghita and Yoga Chintamani as well as works of Goraksanath’s compositions. These were mainly oral (narrative)

Que: Which of these styles of Bengali Literature was rich in the use of code words and sentences

Ans: The correct answer is a. Nath Literature was the style of Bengali Literature rich in the use of code words and sentences.

Share with friends
Previous
Fundamental Rights and Duties
Next
Paintings for Patrons: The Tradition of Miniatures