In times like these everything is available at a click of a button, even the most the most basic aspects of human life like food and socializing. But our earliest ancestors were not so lucky. Back then, even before civilization took over the earliest people, i.e. the primitive man lived out in the open. Let’s understand more about our long lost ancestors.

Needless to say, the earliest people were hunter-gatherers. Because they lived out in the open, they had to hunt other animals, gather plants and fruits to produce food. Animals in that period were very fast and quick. To survive among them meant that the earliest people had to be as quick, alert and to have a good presence of mind.

As gatherers, they had a good knowledge of the plants and fruits. Considering these facts and activities they performed, they moved from one place to another. The reasons for their nomadic life were:

The earliest people lived in the prehistoric period. The main material used then for making tools was stone. Undoubtedly because of the use of stones for making tools, this period is known as the Stone Age. Stone Age further is divided into three phases, namely

The world ‘Palaeolithic’ is derived from two Greek words, ‘Palaeo’ and ‘Lithos’. The word ‘Palaeo’ means Old and ‘Lithos’ means Stone. Therefore this period is known as the Old Stone Age. Old Stone Age extends from 2 million years ago to 12,000 years ago. The tools during this period were made of stone and were blunt and no refinements. 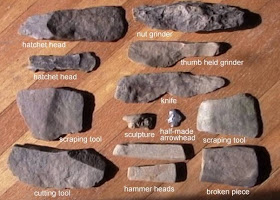 We can see in this figure that these tools are big and blunt and lack refinements. Historians believe that these tools were made 2 million years ago. We also see the tools of later period. They are smaller and much sharper. These were made many thousand years after.

These tools were developed 10,000 years ago. These are much smaller and show sharper edges. Apart from stones, harder objects like bones and woods were also used to make tools and multiple other purposes. In India, some of these stone are still in use for grinding wheat to make flour and grinding spices. These uses of these tools were multidimensional such as:

Have you seen the movie called as ‘Ice Age (part 1)’? You should. You will have a clearer idea of the climate during the Stone Age. During the Stone Age, ice was all around and there was almost no vegetation on Earth. After global warming, Ice age came to a stop as ice began melting 12,000 years ago.

The end of ice age paved a way for clearance of vast spaces of land and warm temperature for the vegetation to grow. And more vegetation meant the better availability of food for animals and plants. This was the period during which our everyday mammals proliferated.

After the meltdown of ice, grass family began to grow in the most part of the world. Wheat, Rice, and Corn are the parts of the grass family. 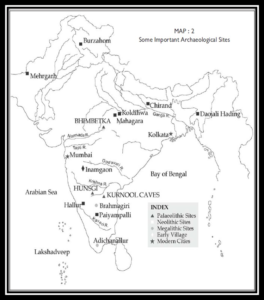 Earliest people were spread all over the world, even in India. Some major sites during which Stone Age people lived in India are:

The two most common distinction between these sites were: River and availability of Stones. Where there is water there is life, surroundings near the river are always flourished and the availability of natural vegetation is plenty. These sites are located on the Deccan Plateau, it has plenty of stones so the resources needed to make tools were easily available. Historians have guessed the derivation of the methods for making these tools. The possible methods of making tools back then are:

The discovery of fire changed the very fabric of human living. It definitely changed the human life dramatically. People might have learned to use fire after seeing the flares of a forest fire. It might also be possible that people have learned to produce fire by rubbing two stones together while shaping them. It was used for various purposed as cooking, clearing forest and protection from animals. Many cave paintings have been found in cave dwellings of Stone Age. For example, the caves in Bhimbhetka. Majority of these paintings portray animals and hunting. Historians believe these paintings might be made as a part of the ritual. Another possibility is that people had enough spare time to think about the nature around them.

They also portray that people used to live in the community as living together provided protection against predators, the herd can kill any big animal with their tools. Historians believed that men went hunting and women lived in the caves taking care of children and collecting plants, berries, and roots.

Question: Why did the hunter-gatherers travel from place to place?

Answer: Hunter-gatherers travelled place to place in search of food. Once food resources at a place were exhausted, they needed to go to a new place.

On the Trail of the Earliest People

On the Trail of the Earliest People